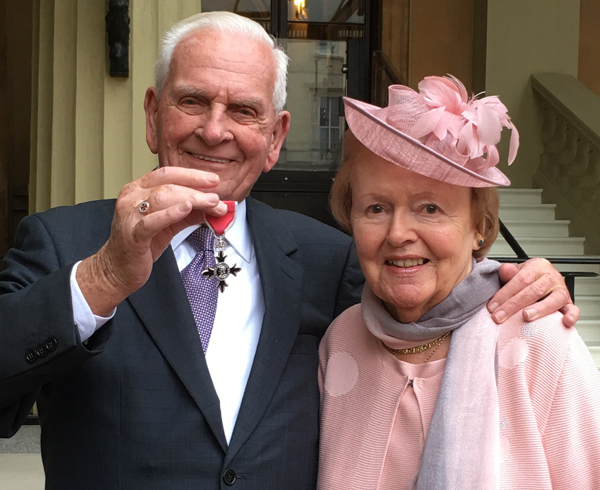 Stanley McIlroy and his wife Noreen after Stanley was presented with his MBE at Buckingham Palace.

St Anne’s Cathedral parishioner Stanley McIlroy, aged 92, was at Buckingham Palace on December 6 to receive an MBE from Prince William, Duke of Cambridge.

Stanley was named for the award, for charitable services, in the Queen’s Birthday Honours List last June.

In almost 60 years of dedicated fundraising, Stanley and his wife Noreen have raised more than £1million for charity, with the lion’s share for Cancer Research UK.

Stanley, a former Cathedral Board Member, has worshipped in St Anne’s for almost 60 years. Speaking in June, he said he was delighted to accept his MBE on behalf of Noreen and all the people who have supported his fundraising activities over more than half a century.

“It is a way of Cancer Research UK saying thank you and I accept it willingly,” Stanley said. “If Noreen and the people of east Belfast had not been behind me I would never have raised all the money.” 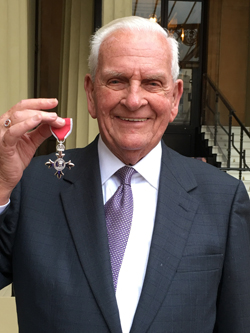 Many years ago, Stanley’s father learned he had cancer and might only have six months to live. But he survived another 12 years, and Stanley believes his life was extended because of an operation he had undergone at the Royal Victoria Hospital.

For this reason Stanley and Noreen have worked tirelessly and selflessly for decades, raising more than £850,000 for Cancer Research with an additional £200,000 plus going to other charities including the Widows and Orphans, the Heart Foundation and Bryson House.

Stanley said he believed his father had lived all those years beyond his diagnosis because medical research had made the life-saving operation possible.  The couple say Cancer Research UK funds research worldwide in the hope that a breakthrough in the cure for cancer will make a difference to all sufferers.

Stanley was manager of Yardley cosmetics for 25 years and Noreen is a retired nutrition and hygiene lecturer. They married in St Anne’s on Easter Monday, April 22 1957. They have a daughter, Susan. Stanley was a Cathedral Board member for 33 years, and Noreen’s father was one of the sergeants who carried Lord Carson’s body into St Anne’s for burial.

Stanley, along with Sir Donald Murray and Dean Sammy Crooks, was instrumental in the launch of the first of the now legendary Black Santa charity sit-outs, the 40th of which will take place on the steps of St Anne’s this month.

Stanley and Noreen did charity work for many years, but it was 1987 before they became officially involved with Cancer Research, joining the local branch committee. Stanley later became chairman, and when the committee dissolved, he and Noreen continued to fundraise for Cancer Research in the Knock and Newtownards Road and Cregagh Road areas.  They arranged to have collection boxes placed in shops and businesses, organised flag days and balls, and persuaded volunteers to do a variety of challenges including parachute jumps, marathon runs, a cycle along the Great Wall of China, even immersion in a tank of sharks!

Stanley said the fundraising keeps his brain active. “Eight years ago I took a heart attack. I now have a pacemaker and stents. Through research I am alive today. I can’t just sit and do nothing,” he said.