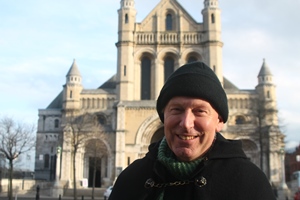 Belfast’s Black Santa, the Very Rev John Mann, is making preparations for the 40th charity sit-out on the steps of St Anne’s Cathedral.

This, Dean Mann’s sixth annual sit-out, gets underway at 10am on Friday December 16. As this great Belfast tradition enters its fifth decade, the Dean is looking forward to once again meeting those who drop money into his barrel so generously every year.

As always he will be supported by the Bishops of Connor and Down & Dromore and members of the Cathedral Chapter who will join the Dean on the steps of the Cathedral from 8am until 6pm every day, with the exception of Sunday, from the launch until Christmas Eve.

Looking forward to this milestone sit-out, Dean Mann said: “There is something about a 40th anniversary that resonates with us in a special way.  I think it is because there are still plenty of people about who recall the beginning clearly, this with a sagely nodding, ‘I remember when….’

“So it is that Black Santa is remembered from 1976 in grainy old news broadcasts, and, like Dr Who, has managed to be re-invigorated for a new age with a new face.  But the principle is the same, no matter how much money is raised, the tradition is part of Belfast life and will be for a long time to come.”

The tradition was established by Dean Sammy Crooks who, after his installation in the Cathedral in 1970, set about raising major funding to complete the Cathedral, a project that had been on-going since 1899.

In 1975, after severe flooding in Bangladesh resulted in many thousands of deaths, Dean Crooks decided to stand on Donegall Street outside his Cathedral to collect money for the disaster appeal. This impromptu collection was so successful that he was persuaded to repeat it the following Christmas, using the slogan: ‘Give and let live. Save the children, feed the hungry, heal the sick. Please don’t pass them by.’

And so began the ‘Dean’s Sit-out’ which has become a major part of the Christmas tradition in Northern Ireland. Dean Crooks was dubbed Black Santa by the media and community because of his black Anglican cloak.

He was awarded the OBE in 1981, chiefly for his services to charity. Sadly, soon after his retirement, Dean Crooks died in a road accident. He is commemorated in a Blue Plaque outside St Anne’s.

The tradition he had started was maintained by his successor Dean Jack Shearer, and later by Dean Houston McKelvey before it passed to the current Dean.

Dean Mann said that he is often asked how much has been raised by Black Santa since that first Sit-out in 1976. “The truth is that we don’t know. We can hazard a pretty good estimation, but the overall sums raised have not been the prime object; that, very firmly, lies in the good that whatever is given is put to by the charities concerned,” Dean Mann said.

“So whilst we remember the history, and give thanks for Sammy, Jack and Houston and all who have supported them over the years, our thoughts are on today: How can we raise as much as possible at Christmas 2016?”

The Dean is hoping that in this, his sixth Black Santa year and the 40th of the tradition, he can reach his £200,000 target. He also expects the sum collected since he took on the Black Santa mantle to pass the £1 million mark early in the Sit-out.

“We remember that whatever is raised, little or great, it will benefit someone, somewhere, who would be the poorer but for this great St Anne’s and Belfast tradition.  The generosity of the people who give to this fund, from Belfast and beyond, never ceases to hearten and amaze me,” Dean Mann said.