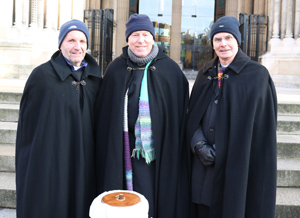 Dean John Mann pictured during the 2016 sit-out at St Anne’s with Bishop of Connor, the Rt Rev Alan Abernethy and the Rev Canon Ronnie Nesbitt.

This is the largest amount collected in the Dean’s six years as Black Santa and is a fantastic acknowledgement that, even after 40 years, this Belfast tradition founded by Dean Sammy Crooks in 1976 continues to inspire people to dig deep to help others.

Money was donated in the usual manner, deposited by the general public into the barrel on the Cathedral steps during the period of the Sit-out. Dean Mann said the giving on the street was at least as positive and generous as ever.

Funds were also donated by post and in a new initiative online through the Black Santa Just Giving site. This will remain open for donations until Friday January 20 and can be accessed at https://www.justgiving.com/campaigns/charity/stanne-cathedral/blacksanta2016

The Dean and his team at St Anne’s Cathedral thank all those who have supported the 2016 Black Santa Appeal, the proceeds of which will be passed on to charities at the annual Good Samaritans service taking place on Sunday February 5.