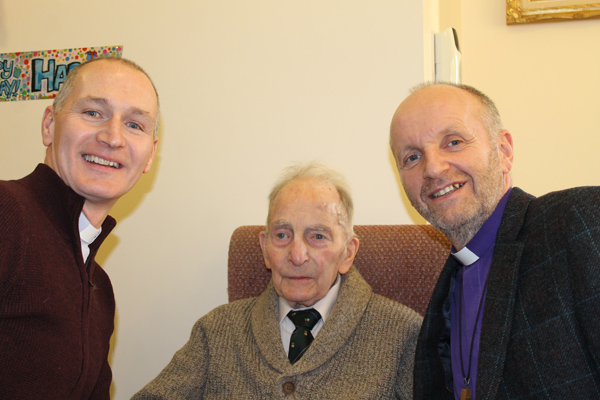 Congratulations to Mr Bertie McNeill, a parishioner of the Church of the Holy Name, Greenisland, who celebrated his 100th birthday on January 4.

Until last year, Bertie continued to live in his own home, but is now a resident of Abbeyfield House, Greenisland, where he celebrated his birthday with family and friends.

Among the many callers were Bertie’s rector, the Rev Paul Lyons, and the Bishop of Connor, the Rt Rev Alan Abernethy.

Bertie was predeceased by his wife Irene more than 25 years ago. He has four children, Brian, Alan, Hilary and Alice – three of whom have retired!

Prior to his own retirement, Bertie worked as an engineer at York Road Train Station. He grew up on the Antrim Road and was a parishioner of St James’s Parish Church before his move to Greenisland some 40 years ago.

Paul paid tribute to Bertie. “He is a great character and is full of stories. He was still coming along to church up until just a couple of years ago. He loves singing, and when he sings the older hymns he doesn’t even have to look at the hymn book, he knows all the words!”