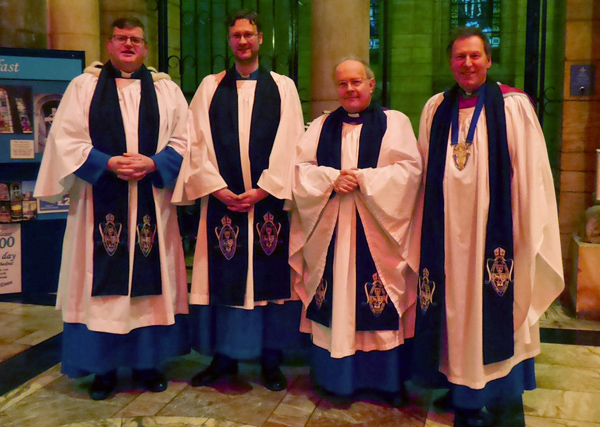 Mark was formerly Priest-in-Charge of St Colmgall’s, Rathcoole Parish, Diocese of Connor. He is married to Cherry and has two boys. A native of Bangor, he is a former student of Bangor Grammar School. He read Theology at Fitzwilliam College, Cambridge, and after graduation worked for James Brown and Sons Funeral Directors from 1999 to 2006.

Mark was curate assistant in Agherton Parish, Portstewart, from his ordination in June 2008 until his move to Rathcoole in May 2012. He was appointed Dean’s Vicar at St Anne’s Cathedral in April 2016.

David was a Canon of St Anne’s for the Diocese of Down and Dromore, and after his move to Connor (he was instituted as rector of Kilbride on November 8 2016) he was appointed a Canon for Connor Diocese.

He trained for ministry in Dublin and was ordained in 1986. His first curacy was in Ballyholme where he remained for four years until his appointment as Vicar Chorale at St Anne’s Cathedral, Belfast.

He was appointed as a Canon of St Anne’s Cathedral by the Bishop of Down and Dromore four years ago.

David has been leading pilgrimages to the Holy Land every year for 23 years, and is the Chairperson of the Down & Dromore and Connor Organ Scholarship Scheme.

Gareth succeeds the Rev Canon Norman Jardine who has retired. He was ordained deacon in 1995 for the curacy of Willowfield in Down Diocese. He served a second curacy in the Cathedral Parish of Dromore before becoming rector of Magheralin in Dromore Diocese.

He and his wife Ruth spent 13 years in Magheralin, where they enjoyed the growth of the church and had their three children.

Gareth was a chapter member in Dromore Cathedral for some four years until he was appointed to Holywood Parish at the end of 2015.