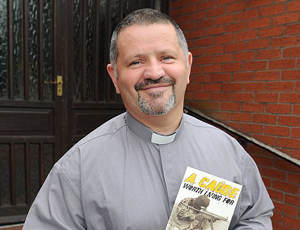 A former member of the Ulster Volunteer Force who became a pastor in England after serving an 11-year sentence in the Maze prison will speak at a number of venues between February 18 and 22.

Pastor David ‘Packie’ Hamilton will be speaking on the theme ‘How Healing Comes’ at churches including St Anne’s Cathedral, St George’s, Belfast, and Lisburn Cathedral.

David was imprisoned in 1978. He had a strong Christian conversion in 1980 which he attributes to the fervent prayers of an elderly lady called Annie Beggs.

On his release from prison in 1983, David became a full time Christian worker, evangelist and preacher, working firstly with Prison Fellowship and Teen Challenge before becoming a pastor of a large independent church in Manchester.

He is now retired and undertakes preaching engagements wherever and whenever called. He is a very good preacher and has a repertoire of a rich number of factual stories to tell and brings them alive with his style which can be very humorous at times. On previous visits to Belfast, many have commented on how impacted they were by David’s testimony and preaching.

David is the author of A Cause Worth Living For: My Journey Out of Terrorism, published in 2008.

His appearance in St Anne’s Cathedral will be at Special Service of Healing organised by the interdenominational Divine Healing Ministries.

David’s full schedule is as follows: