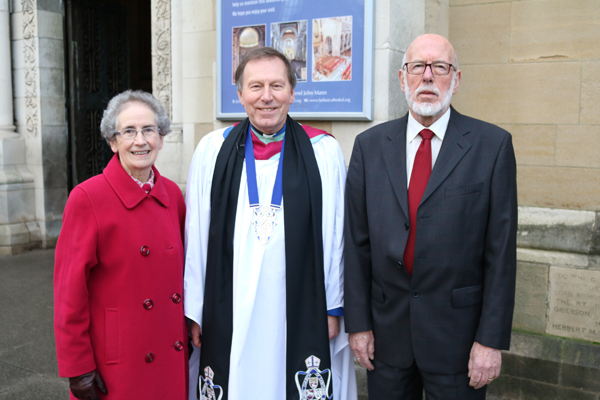 Mrs Myrtle Kerr, the Very Rev John Mann, Dean of Belfast, and Mr Robert Kay at the service of installation of Lay Canons at St Anne’s Cathedral on January 15.

History was made in St Anne’s Cathedral on Sunday January 15 when the Cathedral’s first Lay Canons were installed.

Mrs Myrtle Kerr and Mr Robert Kay were presented by the Archdeacons of Belfast and Down respectively and after the reading of the Mandate by the Cathedral Registrar, the Dean of Belfast, the Very Rev John Mann, led each new Canon to their designated seat. 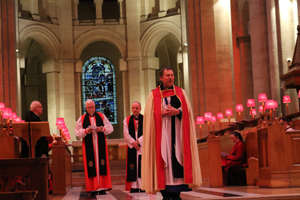 Dean John Mann welcomes the Bishops of Connor and Down and Dromore to say a few words about the new Lay Canons.

The appointment of Lay Canons to Church of Ireland Cathedrals only became possible in 2010. The Constitution allows St Anne’s Cathedral to appoint up to three Lay Canons from Connor Diocese and up to three from Down & Dromore Diocese. Mrs Kerr and Mr Kay are the first to be appointed.

Mrs Kerr, a parishioner of Clonallon and Warrenpoint with Kilbroney, and her late husband Cecil moved from the Chaplaincy in Queen’s University, Belfast, to establish the Christian Renewal Centre in Rostrevor in 1974.

Introducing Mrs Kerr at Sunday’s service, the Bishop of Down and Dromore, the Rt Rev Harold Miller, said he ‘could not think of a more suitable person’ for this role. He told Mrs Kerr: “This is honouring you as a person in your own right and as the person who shared a ministry with Cecil all through the years.” 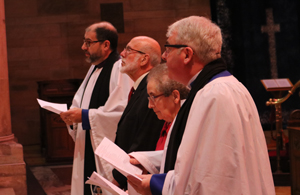 Mrs Kerr and Mr Kay flanked by the Archdeacons of Belfast and Down.

Speaking in September when Mrs Kerr’s appointment was announced, Bishop Miller described her as ‘an example to all of us of what it means to follow Jesus Christ and to carry in her very being the message of reconciliation.’

Mr Kay, who is married to Carol and is a parishioner of Agherton in Portstewart, was introduced by the Bishop of Connor, the Rt Rev Alan Abernethy, who described him as a ‘giver.’

Mr Kay served faithfully as lay honorary secretary of the Diocese of Connor for more than 30 years.  He also served on the Representative Church Body (RCB – the governing body of the Church of Ireland), the RCB Executive and was until very recently chair of the plans committee of the RCB. 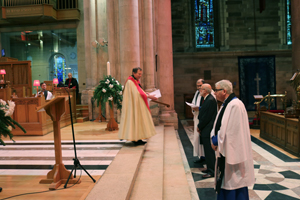 The Bishop of said: “You have used your professional expertise as your service to others and this was indeed your ministry and example for us all. You have served parishes, the diocese and the Church of Ireland with humility, grace and humour.”