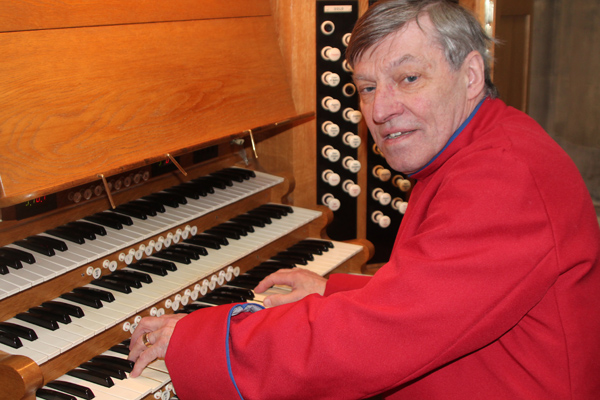 Mr Ian Barber, who has been Organist at St Anne’s Cathedral for 34 years, is to retire later this year.

The news was received by the Belfast Cathedral Board at its meeting on January 12 with both sadness and ‘a deep sense of gratitude.’

Ian will retire on August 31. The Dean of Belfast, the Very Rev John Mann said:  “The organ of St Anne’s Cathedral has had a relatively small number of regular players over the 110 years that it has been in existence. To be reminded that Ian has graced it for almost a third of that time is to recognise a staggering achievement in itself.

“When one adds to that fact the quality of his musicianship and the quiet modesty with which he displays it, it is hard to properly pay tribute to Ian’s service to the Church of Ireland, St Anne’s Cathedral and the musical life of the City of Belfast.

“We have some months yet to enjoy his sensitive accompaniments and both the robust and the poignant voluntaries with which we are spoilt week by week, but we hope too that he can be persuaded to make occasional guest appearances, even after his well-earned retirement!”

St Anne’s Master of the Choristers David Stevens said he was extremely grateful to Ian for all of his years of service to St Anne’s, and particularly for his friendship and support.

“The music department has undergone a number of changes in the past few years, yet Ian’s organ playing, generosity of time and friendly encouragement have been constant and very much appreciated,” David said.

Ian was made an Associate of the Royal School of Church Music in October 2014 in recognition of more than three decades at the organ in St Anne’s.

Son of a Church of Ireland clergyman, Ian grew up in Holywood and attended Campbell College. He cut his teeth on the organ in the parish of St Philip and St James, and won a scholarship to the Royal School of Church Music, progressing to the Royal College of Music in London.

On graduating he was also made a Fellow of the Royal College of Organists (FRCO) with a choirmaster’s diploma.

Ian moved to Canada to play the organ in St Mark’s Church in Ottowa. After two years he went to the Bishops’ University in Quebec to take a Degree in Theology and Clergy Training and when he qualified he moved to St Thomas’ Church in St Catharine’s, Ontario, as an organist.

Returning to Northern Ireland, Ian took up the post of Organist and Choirmaster at St Columb’s Cathedral in Londonderry. He also taught at Victoria College and later Strathearn School, where he was Head of Music for 21 years.

Jonathan Gregory, then Director of Music at St Anne’s Cathedral, asked him to help out, and in 1983, with the blessing of Dean Sammy Crooks, Ian was appointed Assistant Organist. This was a post he held until 2010 when he was recognised as Organist and Choirmaster. With the appointment of David Stevens as Master of the Choristers in April 2012 Ian resumed his role of Organist.

St Anne’s Cathedral’s new chamber organ was dedicated and named The Barber Organ in honour of Ian in September 2014.

Ian is married to Jean, who turns the pages for him at services.

David Stevens said: “I wish both him and Jean well and hope that we’ll continue to see them in St Anne’s.”