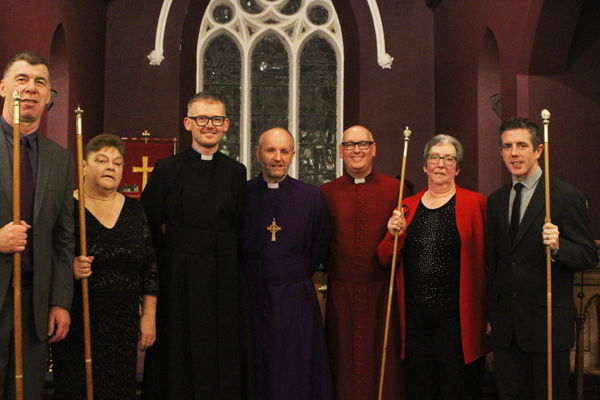 The institution of the Rev Jonny Campbell-Smyth as rector of the United Parish of Ballynure and Ballyeaston, Ballyclare, took place on Tuesday January 17 in St John’s Parish Church.

Jonny comes to Ballyclare from the Parish of Jordanstown where he was curate assistant.

Brought up in Lisburn, Jonny attended St Paul’s Parish and later Lisburn Cathedral. He worked as Head of IT with a Northern Ireland-wide clothing firm, and his work took him to Coleraine where he worshipped in St Patrick’s Parish. 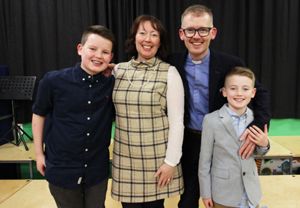 The Rev Jonny Campbell-Smyth, rector of Ballynure and Ballyeaston, with his wife Alison and sons Josh and Nathan, at the service of institution on January 17.

Jonny then took on a job as an IT consultant with the UK Government, and for 10 years commuted to England. “It was during this time I felt the call to ministry as a result of being around a lot of folk who were searching for things in their life such as wealth and success. God really reached me during that time,” Jonny said.

He was among the first intake on the new MTh course at the Church of Ireland Theological Institute. Jonny was ordained a Deacon in September 2011 and did his internship in Holy Trinity Parish, Portrush. He served his first curacy in his home church of St Patrick’s, Coleraine, and his second curacy in St Patrick’s, Jordanstown.

Jonny is married to Alison and they have two sons, Josh and Nathan. He said the family had been looking forward to the move to Ballyclare. “Alison, myself and the boys are really looking forward to this new chapter. The sense of God’s call to us is so tangible,” Jonny said.

“We will so miss the people of Jordanstown but are excited to develop new relationships in Ballyclare and Ballynure.”

Refreshments after the service of institution in Ballyclare on January 17.