More than £220,000 handed out at Cathedral’s Good Samaritans Service 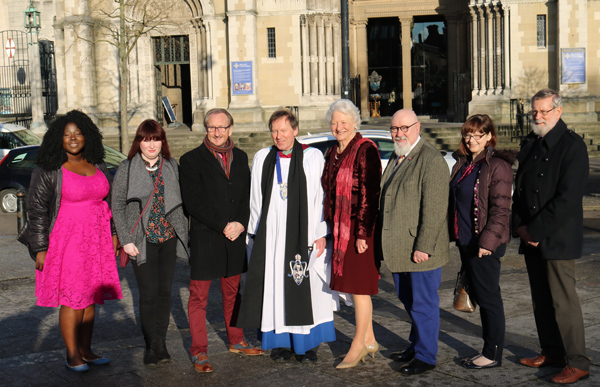 Among those attending the annual Good Samaritans Service in St Anne’s were charities working locally with groups including the homeless, refugees, people with disabilities, health charities, young people and older people. 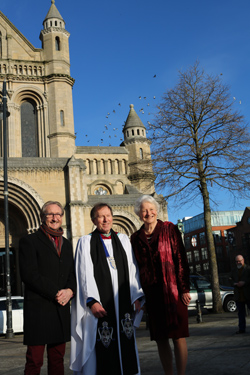 The cheques were presented by special guests Dame Mary Peters and entertainer George Jones. The local grants awarded ranged from £200 to £5,000, with a £30,000 grant for overseas work made to Christian Aid.

The Ulster Youth Orchestra received a grant of £4,740 towards the delivery of its 2017 summer residential course and concerts. This will benefit around 90 young people aged 14-23 who will attend the course running from August 10-19 led by acclaimed conductor Michael Seal.

A spokesperson for the Ulster Youth Orchestra said: “This unique opportunity not only benefits the young people musically, but enables them to meet like-minded people from different community backgrounds, boosts their confidence and is life-enhancing.”

A grant of £1,200 to Lisburn Outlook will allow the charity, which provides social and recreation activities for blind and partially sighted people, to purchase two tandem bicycles.

Shelter Campaign for the Homeless was awarded £2,000. This will support various strands of the charity’s work, including its GABLE project which offers a repair and maintenance service for older and disabled people at a subsidised cost.

A spokesperson for the charity said: “The donation from the sit-out will make a very helpful contribution to Shelter Northern Ireland’s work.”

Oh Yeah Music Centre, based in Gordon Street, Belfast, received a grant of £3,400 which will help fund its Shake, Rattle and Roll project. This builds on four years of work the centre has been doing with people from supported living and day centres.

The project will focus on groups who are neglected and struggle to access arts based activity. As well as bringing people together at the Centre, there will be outreach workshops and three Music Bus tours, reducing isolation and loneliness among older people.

A spokesperson said: “We have noted in previous work that people who attend worships enjoy the sessions immensely. People are more engaged, less stressed and make new friends and have new interests and subjects to stimulate them.”

The RNLI has been awarded £1,527, the amount needed to train a crew member. The charity, which has 10 lifeboat stations in Northern Ireland, is 100 per cent funded by donations and legacies. In 2015, NI Lifeboats launched 269 times, bringing 279 people to safety, while RNLI lifeguards helped 218 people.

A spokesperson said: “We depend on our dedicated volunteers and the financial assistance of supporters to save lives at sea.”

A grant of £1,150 to the Migrant Centre NI will pay for training sessions for two groups of 10 people who will receive accreditation enabling them in turn to facilitate the charity’s Belonging Project Workshops.

These aim to help participants explore how they can interact with people from a diverse background in order to achieve an environment with understanding and acceptance in their schools, workplace and communities.

Two of the largest grants were to charities working with the homeless and street sleepers. The Simon Community and the SoS Bus were each awarded grants of £5,000.

The Simon Community works with people to help them resolve problems and circumstances that might put their home at risk. It has 22 accommodation projects in Northern Ireland and offers 385 beds every night of the year for short-term and long-term clients who are experiencing homelessness. The charity helps more than 3,000 people every year.

The SOS Bus helps vulnerable people at times of crisis, providing professional medical attention, transport to hospital, home or other place of safety, emotional care and listening ear services, signposting to statutory service providers and refreshments. It has 250 trained volunteers.

The Dean of Belfast, the Very Rev John Mann, who completed his sixth Black Santa Sit-out in December, said the annual Good Samaritans Service was one of the most comprehensive gatherings in Northern Ireland of groups doing charitable work.

“These range from organisations aiding young people to those supporting the elderly, from those struggling with medical conditions to those working in reconciliation and healing in its broadest sense,” the Dean said. “They include many cross-community initiatives and those working in places of social deprivation.

“It is a celebration of much that is good and praiseworthy in our community, and an opportunity to thank those who turn money into action and goodwill into improving the lives of others.” 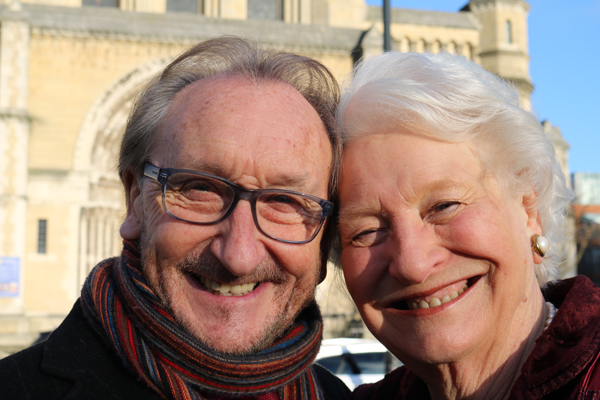 George Jones and Dame Mary Peters were special guests at the Good Samaritans Service and did a great job of handing out almost 200 cheques between them!