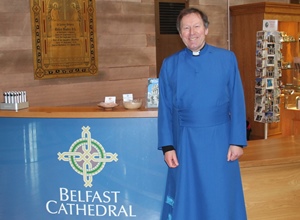 The Dean of Belfast, the Very Rev John Mann, has announced that he will be leaving St Anne’s Cathedral at Easter to take up a post in England.

The Dean told the congregation on Sunday morning that he has been appointed team rector of the Parish of Swanage with Studland in the Diocese of Salisbury.

Dean Mann, who was born in Blackheath, London, spoke of how hard it had been to make the decision to move back across the water having lived most of his adult life in Northern Ireland.

“My wife Helen and I have been privileged to serve in four parishes in the Church of Ireland, as well as St Anne’s Cathedral, and have seen great change in the community,” Dean Mann said.

“Our children were both born here and had much of their education in Belfast.  We will be leaving with fond memories and with the intent of being back as often as is practical.”

Dean Mann said the decision to move across the Irish Sea had been weighing on him and Helen for some time, and had been taken for several reasons.

But the main reason, he said, was because St Anne’s is passing from one phase of transition, into which he was appointed, to another, as the Cathedral Quarter approaches very significant change.

“St Anne’s will rise to the opportunities and challenges that will face a new Dean and the Cathedral Board over the next five years,” Dean Mann said. “It is from this perspective a good time to go.”

“We will also be moving closer to our family and I look forward not only to that, but to returning for a few years to my primary calling as a parish clergyman.  It is a time to look forward for us all.”

The Bishop of Connor, the Rt Rev Alan Abernethy, is a member of the Belfast Cathedral Board. He said: “I will be forever grateful for John’s ministry in St Anne’s, for his prayerful presence. His clear thinking and compassionate care for many will leave the Cathedral in good heart. He and Helen can be assured of the love and prayers of everyone at St Anne’s and the clergy and people of Connor Diocese.”