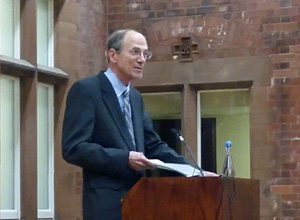 It took the theme of examining Martin Luther’s ‘Sola Scriptura’ – the focus on the Bible as above every other authority – as churches of various traditions reflect on the 500th anniversary of the beginning of the Reformation.

In a creative move, the organisers – the joint Church of Ireland and Methodist Chaplaincy at QUB – brought in Professor Mark Noll to speak to a large audience at Riddel Hall, and invited Bishop Brendan Leahy, Roman Catholic Bishop of Limerick, to respond, and the following evening engaged both in a follow-up dialogue responding to a wide range of questions from the audience.

In this way, a shared conversation was brought about, Bishop Leahy encouraging ‘ecumenical enrichment 500 years on’. 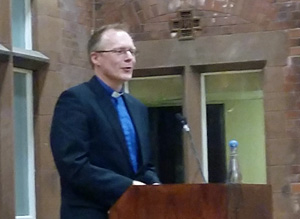 Church of Ireland Chaplain at Queen’s University, the Rev Barry Forde, addresses the crowd at the lecture.

Professor Noll’s lecture was attended by a number of senior figures including Bishop Alan Abernethy, Bishop Noel Treanor and Bishop Donal McKeown, and he was welcomed to Queen’s by the Vice Chancellor, Professor Paddy Johnston.

Professor Noll described himself as a Presbyterian who had recently retired from one of the USA’s great Catholic Universities, Notre Dame. Opening with Martin Luther’s famous words at the Diet of Worms, ‘My conscience is captive to the Word of God’, he argued that ‘Sola Scriptura’ was both ‘a blessing and a curse’ inasmuch as while ‘the Bible alone’ brings a message of hope and liberation, and an ethical guide and a blueprint for holiness, there has also been ‘unprecedented strife over what it has meant to follow the Word of God’.

He referenced the eminent Evangelical theologian J I Packer, who had observed that Protestants have sometimes neglected other aspects of Christian discipleship by an overemphasis on the maxim.

Within Protestantism there has been fracture and fragmentation and even the misuse of the Bible in Imperialism and political aggression, Noll said; however, he stressed that the fragmentation of Protestantism because of ‘Sola Scriptura’ was not as extensive as some might suggest and that the Bible ‘reshapes people into holiness’ – it is ‘a pathway to purification’.

He called, in this 500th anniversary year, for Protestants to examine ‘Sola Scriptura’ ‘with searching scrutiny’ and for others to do so ‘with charity’. He used as the framework for his talk, a number of texts: William Chillingworth (‘The Religion of Protestants as a Safe Way of Salvation’, 1637); Robert Baird (‘Religion in America’, 1844) and Philip Jenkins (‘The New Faces of Christianity: Believing in the Bible in the Global South’, 2006); as well poems by Brooks Hinton and Emily Dickinson.

Professor Noll went on to discuss a number of critiques of ‘Sola Scriptura’ by Brad Gregory (‘The Unintended Reformation: How a Religious Revolution Secularized Society’, 2012) and Christian Smith (‘The Bible Made Impossible’, 2012), the latter (also author of ‘How to Go from Being a Good Evangelical to a Committed Catholic in 95 Difficult Steps’, 2011) questioning the ‘Biblicism’ and ‘rampant interpretive pluralism of Evangelicalism at its worst’. 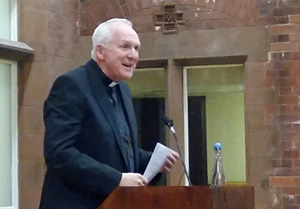 Bishop Leahy responded by recommending that there is room for exploration of ‘Sola Scriptura’, with Roman Catholics coming to the Bible – ‘a common treasure’ – in different ways.

Bishop Leahy spoke about Pope Francis’s recent declaration of gratitude for what was positive in the Reformation and that, especially since the Second Vatican Council, there has been a greater encounter amongst Catholics ‘with the Word of God in its written form’.

He stressed that ecclesiology has changed from the institutional to a greater sense of community in the Body of Christ, drawing on Augustine’s view that the Word proclaimed brings a community to life.

Bishop Leahy also praised the ‘rich’ ecumenical work of ARCIC (the Anglican Roman Catholic International Commission) and spoke of the need to ‘re-receive our traditions in the light of the Word of God … something relevant to all Christian traditions’.