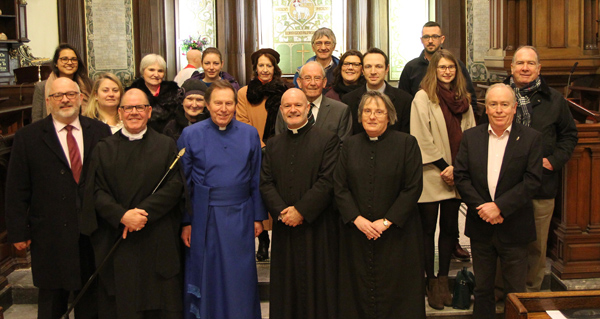 The Dean of Belfast, the Very Rev John Mann, was the guest preacher at a service in St Ann’s Church, Dawson Street, Dublin, on Sunday February 12 when the proceeds of the 2016 Dublin Black Santa Appeal were distributed to 15 charities.

A total of €41,000 was raised during the sit-out outside St Ann’s in the 10 days before Christmas. At the service, the Vicar, the Rev Canon David Gillespie, thanked all those for donating and those at St Ann’s who helped out with the appeal.

On behalf of the charities, Geoff Scargill of Protestant Aid thanked Canon Gillespie and his team for caring enough to organise the appeal each year and said that their contribution made a huge difference to all the organisations.

The Black Santa tradition began in St Anne’s Cathedral in Belfast. In his sermon Dean Mann drew on the Old Testament reading [Deuteronomy 30: 15–20]. He said that in the reading Moses recognised the challenges ahead for the people of Israel as they reached the Promised Land but that ultimately they must make their choices and decisions in the light of the commandments of God. He set before them life and prosperity and death and adversity.

Dean Mann said that the Church had long been concerned with the questions: “How do we translate the very hopes that we have and our daily prayers that flow from them into action that actually changes lives? How do we seek life and prosperity and challenge and confront that which tends to death and adversity?”

The Dean said that the Church has played its part in social action but yet in so many aspects of life today it feels inadequate. He suggested that often the temptation was to avoid confrontation or be frightened by the sheer scale of problems facing society.

“The Black Santa tradition has grown out of this place of decision. The recognition that its desire to support those on the margins and the vulnerable and needy is reflected by society at large. People generally want to help and most of us have our particular charitable concerns, but the advantage of the St Ann’s Black Santa collection is that it supports the range of charities that you see acknowledged on the service sheet so it allows us to have a little part in a portfolio of charitable support,” he stated.

The Dean added that the Black Santa process was very simple. “We are channels for concern reflected by allowing ourselves to be used as conduits of charitable giving. It works because it fulfils a need, linking human generosity with human compassion,” he said.