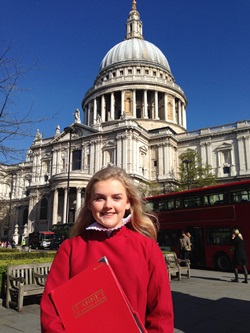 Tania pictured outside St Paul’s Cathedral, London, during her first visit to sing with the Diamond Choir last year.

You can view a video clip of the recording of the CD.

The Diamond Fund for Choristers CD will be released on March 17. This Fund was launched last April at a concert in St Paul’s to mark the Friends of Cathedral Music’s diamond jubilee. The concert brought together choristers representing 60 cathedrals along the choir of St Paul’s for the first time ever

Tania, a Year 13 pupil at Aquinas Grammar School, Belfast, was selected by St Anne’s Master of the Choristers David Stevens to represent the Cathedral at the concert in St Paul’s on April 27 last year.

The concert was presented by Classic FM’s Aled Jones and Alexander Armstrong, and held in the presence of HRH The Duchess of Gloucester.

After her visit to St Paul’s, Tania said she formed new lifelong friendships with choristers from different parts of the country who shared the same interests, and described it as ‘definitely an experience which I will never forget!’

Tania has sung with the St Anne’s Choir for almost four years.  “I love being a chorister of St Anne’s Cathedral as I have always been intrigued in the concept of choral music and the resonating sound of the music in such a big cathedral as St Anne’s,” she said.

“Being a chorister has given me so many opportunities such as singing in Puccini’s opera Turandot, singing with the St Anne’s choir on a tour of Paris, and of course this wonderful opportunity of being able to sing in St Paul’s Cathedral, London.”