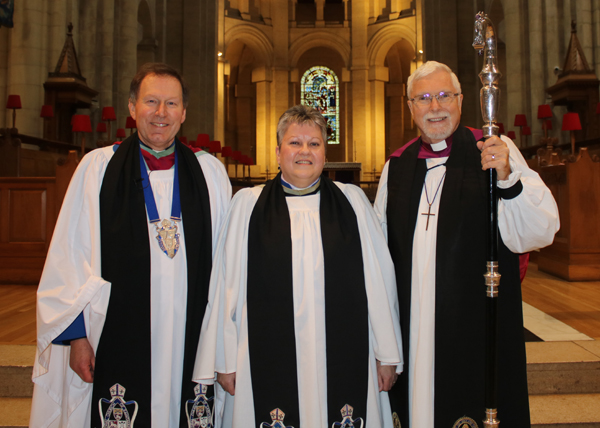 The Rev Gill Withers, rector of Greyabbey & Kircubbin, Ballyphilip & Ardquin, was installed as a Canon of St Anne’s Cathedral by the Dean of Belfast on Sunday March 5.

Gill, who was appointed a Canon by the Bishop of Down and Dromore, the Rt Rev Harold Miller, is a native of Carrickfergus and attended St Nicholas Parish Church.

She was a member of the Sunday School and the parish choir and was involved in running the Youth Fellowship back in the mid-1970s when Bishop Harold was rector of St Nicholas. In her late teens she was also very involved in the music in the parish and led the worship band.

Gill, who taught in The Moyle School in Larne for 11 years and the Prep Department of Methodist College for a further 11 years, was commissioned as a Connor Diocesan Lay Reader in 1987.

A music professional, she plays Double Bass and also taught part time in the School of Music for 20 years. She was Halls Tutor in Stranmillis College for seven years.

Gill did the Non Stipendiary Ministry Course at Church of Ireland Theological College and was ordained in June 1997. She worked with the Rev Canon Neil Cutcliffe in Mossley Parish, Diocese of Connor, until June 2002 when she gave up teaching to transfer to full-time ministry.

On Palm Sunday 2003 she was introduced to Bangor Parish by Bishop Miller and in 2005 moved as vicar to St Columba’s, Knock. In December 2008 she was instituted as rector of Grey Abbey & Kircubbin, Ballyphilip & Ardquin.

She continues to have a love of music and used to play with Gaslight, and now plays Double Bass with New Irish Arts. Gill has been Bishop’s Chaplain since 2004.

Announcing her appointment as a Canon last December, Bishop Miller said Gill had exercised a faithful ministry in the Diocese of Down and Dromore, and particularly in her work on the Ards Peninsula.

“I have known Gill since she was one of my ‘young adults’ when I was a curate at St Nicholas, Carrickfergus. Her formation and ministry have been both in Connor and Down and Dromore, and that, along with her musical talents, make her a perfect person for this canonry.”