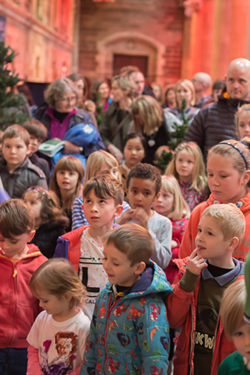 The event, which opened on March 15 and 16 for invited schoolchildren, threw the doors open to families on Friday, St Patrick’s Day, and Saturday, and closed with a special service on Sunday.

The place was literally buzzing on Friday and Saturday, with families taking the opportunity to learn more about Ireland’s patron saint in a fun and educational way. In the region of 1,000 people joined in over the three public days, with 300 schoolchildren attending on Wednesday and Thursday.

This amazing free exhibition and interactive story trail was organised by Connor Children’s Project Development Officer Jill Hamilton and Sister Karen Webb of the North Belfast Centre of Mission. They were supported by the Children’s Council and the Connor Development Team.

Patrick’s Mysterious Adventure was a family friendly event aimed at helping people of all ages to discover first-hand the adventurous life story of St Patrick. Actors re-enacted the tale from Patrick’s capture by Irish pirates to his return to serve the people of Ireland. The role of Patrick was admirably played by Ross Jonas of Play It By Ear, a Christian Drama group. Ross and the other actors, who included members of the Children’s Council,  had the children quite enthralled as our pictures (below) show.

First to experience Patrick’s adventures were children from Blythefield, Harmony, Forthriver, Springhill, Sacred Heart Boys, Black Mountain, St Mary’s and Cliftonville Integrated primary schools who all visited on the Wednesday and Thursday. They followed the interactive story trail and learned more about the life of Patrick through a workshop hosted by an education officer from the St Patrick’s Centre in Downpatrick. They also tried their hand at crafts helped by a local artist.

The event was open from 12pm-4pm on the Friday and Saturday with a full programme of performances running alongside the interactive exhibition. These included Irish dancers, ‘Mr and Mrs Leprechaun,’ circus walkabout acts and an Irish harpist. Children were able to take part in creative workshops hosted by Jumping Clay and Doodlebugs and to re-enact battle scenes with Ardglass Vikings. 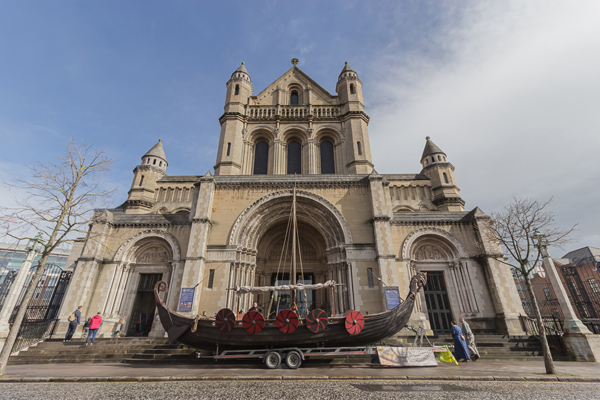 A Viking Longboat was parked up outside St Anne’s.

A huge Viking Longboat was parked up outside St Anne’s and certainly caught the attention of visitors young and not-so-young.

Jill Hamilton said: “In hosting this event, our aim was to give visitors the opportunity to reconnect with the life story of St Patrick, discover more about him and be inspired by his faith and faithfulness to God.

“The event informed and educated visitors in an enjoyable and entertaining way about Ireland’s Patron Saint and encouraged people to come into St Anne’s Cathedral and experience something of the culture and early Christian faith as it dawned in Ireland.

The Bishop of Connor, the Rt Rev Alan Abernethy, paid tribute to Jill, Karen and their entire team for organising what he described as an ‘amazing event.’

“There was an enormous amount of work put into this and the team achieved all its goals and more,” Bishop Alan said. “The volume of people who passed through St Anne’s to view the exhibition over the five days was fantastic. Well done to everyone.”