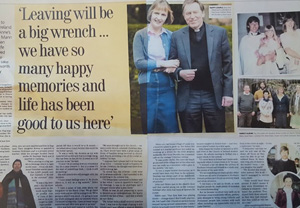 Part of the four page article on Dean and Mrs Mann featured in Saturday’s Belfast Telegraph.

The Dean of Belfast, the Very Rev John Mann, and his wife Helen talk about their life in Northern Ireland, the difficult decision they have taken to leave for a ‘fresh start’ in Dorset and reflect on their time at St Anne’s in a far-reaching interview published in Saturday’s Belfast Telegraph.

Dean Mann has been at St Anne’s for six years. Prior to that he was rector of St John’s Malone, and has also been curate assistant at St Columba’s, Knock and rector in Cloughfern, as well as spending four years in a parish in Hampshire.

Born in London, the Dean met Helen on the Isle of Man when he was a student at Queen’s University.  In the Belfast Telegraph interview, Helen, who has been a GP practice nurse for 13 years, reflects on the wrench of leaving her job, and their bungalow on the north coast.

The couple talk about The Troubles, their faith, Black Santa and how important it is that St Anne’s is a venue everyone can come to.

The Dean, whose last day at the Cathedral will be May 21, said he and Helen were ‘at the start of something fresh.’ But he promised they would be back. “We’re going to miss a huge number of people that we’ve got to know here,” he said.

You can read the full article by journalist Linda Stewart in Saturday’s Belfast Telegraph here.