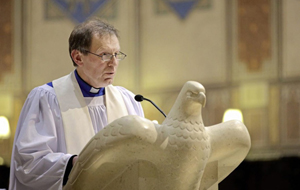 During Holy Week the Dean of Belfast announced that he would be deferring his departure from St Anne’s Cathedral.

Dean John Mann explained that this was due to the sudden illness of his wife Helen.

Dean Mann was due to finish at St Anne’s on May 21 before taking up his appointment as Team Rector of Swanage and Studland. It is likely this will not happen now until after the summer.

In a statement on April 10, Dean Mann said: “Within the last few days Helen has developed Guillain-Barré syndrome.  This unusual condition has a very quick onset, but a slow and unpredictable period of recovery, at best some weeks, but maybe months.  As a result it is difficult to establish a new date to make what is a significant move, until Helen is properly recovered.

“This decision has not been taken lightly, in view of the implications for both the Cathedral and the parish, but under the circumstances it seems to be the wisest course of action.”

Helen was initially treated in the Royal Victoria Hospital but is now home. In his online Blog on Easter Tuesday, Dean Mann expressed thanks to everyone who had sent messages of love and good wishes to Helen, and said she continues to recover slowly.  “Your prayers have been much appreciated,” the Dean added.