Chairs and kneelers dedicated in Regimental Chapel in St Anne’s 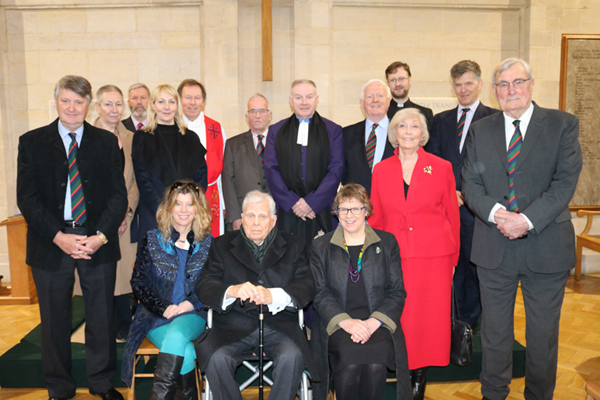 The Dean of Belfast, the Very Rev John Mann, with those who attended the Dedication of chairs and kneelers in the Regimental Chapel at St Anne’s. They include the Rev Dr Isaac Thompson, TD, DL, Regimental Chaplain, Lt Col James Linford, Chairman of the Royal Irish Chapel Committee, and former Chairman Lt Col David Twigg.

New chairs and kneelers were dedicated by the Dean of Belfast in the Regimental Chapel in St Anne’s Cathedral on Tuesday April 25.

Lt Col James Linford, chair of the Royal Irish Chapel Committee, said the new chairs had been commissioned following the reordering and expansion of the Chapel in 2015.

Lt Col Linford said the Committee had been delighted with the response from organisations and individuals wishing to sponsor the chairs. Families of those commemorated by these gifts, and representatives of those who donated them, were present at the service.

The Chapel now houses 30 wooden chairs, many of which have been dedicated at different times since it was consecrated in 1981. 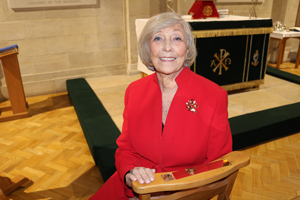 Mrs Evelyn Creaney seated in the chair dedicated in memory of her husband Colonel John Creaney.

Mrs Evelyn Creaney was present, along with her daughter Felicity Pierce, to see one of the chairs dedicated in memory of her husband Colonel John Creaney OBE QC TD DL. Col Creaney was Commander of the Fifth Battalion The Royal Irish Rangers and was Honorary Colonel of Queen’s University OTC and other Regiments. He was also Crown Prosecutor and his wife said his great love was the Irish Fusiliers, with whom he was commissioned in 1955. He died in 2008.

“It is lovely to have a chair in this Chapel in John’s memory and I have lots of family and friends planning to come and see it,” said Mrs Creaney.

Colonel Robin Charley OBE, who celebrated his 93rd birthday on the day of the dedication, attended the service with two of his daughters, Catherine Champion and Elizabeth Charley. 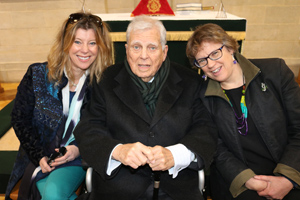 Korean War veteran Colonel Robin Charley, who donated a chair in memory of members of the Royal Ulster Rifles killed in action during the war, with his daughters Elizabeth Charley, left, and Catherine Champion.

Col Charley, a Korean war veteran, and his daughters donated a chair in memory of the officers and men of the Royal Ulster Rifles killed in action in the Korean War 1950-54.

Lt Col Harvey Bicker OBE of the Royal Ulster Rifles took the opportunity to try out the chair he had donated in memory of his uncle, Private Bertie Bicker, 2nd Royal Dublin Fusiliers, killed at Messines on March 23 1918.

The Regimental Chapel in St Anne’s contains many important historical artefacts including Books of Remembrance, the font, lectern, and chairs presented by families in remembrance of soldiers who had lost their lives.

Among the Colours laid up in the Chapel are the last stands of Colours presented to 1st Bn Royal Inniskilling Fusiliers by HRH the Duke of Gloucester in Kenya in 1962 and 1st Bn The Royal Irish Fusiliers by Field Marshal Sir Gerald Templer in Germany in 1963.

One of the most important artefacts is a Book of Prayers written on rice-paper by a prisoner of war in Korea and presented to Capt James Majury, a gift from the prisoners who had found comfort in the services he had held for them during their captivity in 1952-53.