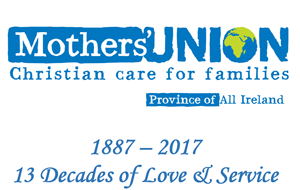 This year marks the 130th Anniversary of Mothers’ Union (MU) in Ireland and to mark the occasion, All Ireland President Phyllis Grothier is making a pilgrimage round all 12 dioceses in Ireland.

On 13 May, Phyllis will be joined by the MU Worldwide President Lynne Tembey as they travel from Derry & Raphoe Diocese to Connor Diocese.

MU members will meet them at the footbridge in Coleraine from where they will travel to Ballycastle where the first MU branch in Ireland was formed. Members will be joined by the Mayor of Coleraine, Alderman Maura Hickey, and MU Diocesan Chaplain and Archdeacon of Connor, the Ven Dr Stephen McBride. En route to Ballycastle the pilgrims will stop for a short worship service at Ballintoy.

In Ballycastle members will be joined by the Lord Lieutenant, Joan

Christie. Afternoon tea will be served in Ballycastle and this will be followed by a prayer walk round the town. The day will end with a short worship service in the church.

To mark the anniversary, 13 trees are also to be planted – one for each diocese and one for All Ireland.