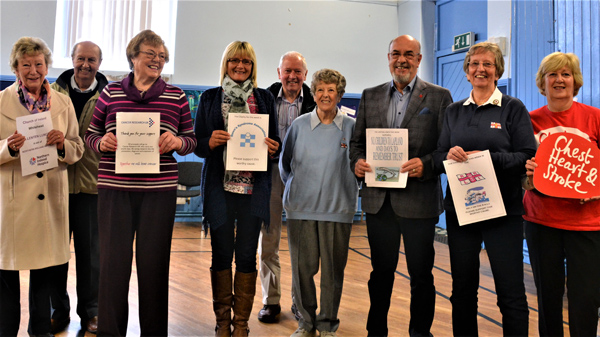 Representatives of the charities who received cheques from the Parish of Whitehead and Islandmagee Lenten Lunches visited on Thursday April 27.

The Parish of Whitehead and Islandmagee once again held a series of very successful Lenten Lunches.

This initiative began as a fund raiser to help pay for some major repairs to both churches 14 years ago, but even then it was recognised that the parish should be reaching out to help others as well.

In the early years a percentage of the monies raised each week went to one of seven local charities.  As the years went on the amount given to the charities increased every year.  For the last couple of years each charity has received £400 (£2,800 in total), almost 47 per cent of the total monies raised over the seven Wednesdays in Lent this year.  This brings the total donated to charities to more than £26,000 since the Lunches began 14 years ago.

A dedicated team of parishioners works very hard to make and serve lunches of freshly made soup, wheaten bread, filled rolls (the rolls supplied fresh by McKee’s local bakery), a range of homemade desserts and tea or coffee and biscuits.  They cater for those who come along for lunch but also provide a carryout service and a delivery service to people in their homes and businesses.  With the average lunch costing £5.00 there are a considerable number served to raise an average of just over £800 per week!

The rector, the Rev Canon Mark Taylor said: “We are blessed to have a great deal of community support within Whitehead and from further afield.  One lady travels from Belfast each week to enjoy her lunch with us, and we had people coming from as far away a Newtownards to meet up with friends and have lunch.

“We are hugely thankful to the many local businesses who support us each year, with their help and generosity we are able to keep our expenses down ensuring more money is available to support the charities.”