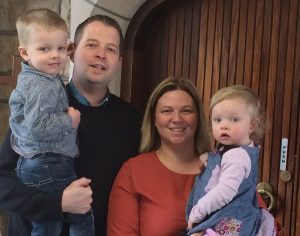 The Rev Peter Jones with his wife Kim and children Timothy and Hannah.

Peter, 35, is married to Kim and they have two children, Timothy aged three and one-year-old Hannah.

Originally from Tobermore, Peter is a former pupil of Rainey Endowed School in Magherafelt, and read History at the University of Ulster in Coleraine. After graduating, he did a PGCE and taught history for eight years at Lisneal College in the Waterside, Londonderry. He was involved in administration and pastoral care and was a Year Head. He was also a Principal Examiner in GCSE History.

Peter trained at the Church of Ireland Theological Institute and was ordained a deacon in 2013. He served an internship in Maghera Parish and after being ordained a priest in 2014 he was curate assistant in Drumglass.

“Kim and I are looking forward to moving to Mossley,” Peter said. “We felt a real strong sense of God’s call. We will leave Drumglass with heavy hearts as we have a brilliant relationship with the people there, but God is in this and we are very excited about what awaits us in Mossley and about getting to know the people in the parish and ministering to them.”

Peter is interested in reading, walking and football, and was involved in setting up a football team in Drumglass.

The institution will take place on Wednesday August 23 in the Church of the Holy Spirit, Mossley at 8pm.