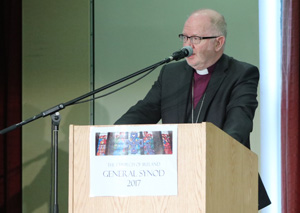 In his Presidential Address, delivered at the start of business on day one of the Church of Ireland General Synod on Thursday March 4, The Most Rev Dr Richard Clarke, Archbishop of Armagh, focused on the theme of identity.

The General Synod runs from Thursday May 4 to Saturday May 6 in the South Court Hotel, Limerick.

In his address, the Archbishop said: “Many of the extraordinary changes on the world scene over the past year might reasonably be seen as revolving ultimately around a single conception, that of identity…

“Massive difficulties arise when there is a serious clash between differing perceptions of fundamental identity, when each side in the discussion seeks to demean, threaten or even destroy the other, and we have indeed seen many examples of this over recent months, and in many places, near and far.”

He continued: “What then can easily follow … is a willingness to replace any obedience to truth with whatever risible nonsense will reinforce our prejudices as we seek to demonise the ‘otherness’ of those we see as different from us, and hence is highly dangerous…

“The casual arrival of such a tactic – totally unblushingly – into public discourse in the society of today, in the supposed interests of maintaining one’s own cherished identity, has polluted the moral foundations of society itself.”

Archbishop Clarke stated: “As Christian disciples, we recognise that we do indeed have a basic identity that we must share with all others, that of being made by God in His image and likeness. This means that others – all others – must be treated with a complete dignity and with an utter respect…

“There are of course other identities of which we must be aware … but these cannot be allowed to deface our essential fundamental identity of being loved equally by God.

“But we are called to find another identity within our Christian calling. This comes through strongly in the Gospels where Christ calls us to find a true identity, not only with those who are like us, or with those whom we find it easy to like or admire, but with those who most need our love and our care.”

Archbishop Clarke drew on his theme of fear of otherness and insecurity of identity to speak about the refugee crisis, xenophobia and ‘the terrifying incidence of domestic abuse and violence’ across the island of Ireland.

With regard to domestic abuse and violence, he stated: “It is in every community. It is under our noses, perhaps even in our own families. People who suffer in this way must be encouraged to seek help.

“When people cannot come to terms with themselves and their real identity, or cannot be at ease with what they are, then the most terrible things can happen… It is in a world well beyond the comfort of our pews that people are living without meaning or identity, who need love and care, and who do respond … to unaffected generosity and concern in the name of Jesus Christ.”