An American lady who was baptised in Christ Church Parish, Derriaghy, more than 70 years ago made a poignant return to the church on May 5.

Bob and Elizabeth Spaulding arrived today on the Caribbean Princess. Elizabeth (maiden name Houston) was baptised in Christ Church in 1944 and emigrated to the USA when she was 3 years old. Today Bob and Elizabeth renewed their wedding vows in a service officiated by Rev Clifford Skillen.

Elizabeth Houston-Ramsey/Spaulding left Ireland when she was aged just three, and had never returned until the cruise ship ‘Caribbean Princess,’ on which she was holidaying, called into Belfast for just one day.

Elizabeth, who was born in the White Hospital, Lisburn, on April 22 1944, was accompanied by her husband Robert. Lifelong friends, they married a couple of years ago after both were widowed. 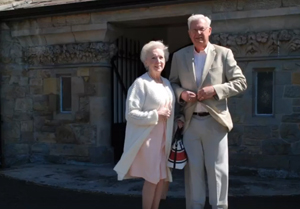 Elizabeth and Robert in Derriaghy.

Elizabeth wanted to renew her marriage vows in the church in which she was baptised, and although the rector, the Rev Canon John Budd, was not available during their visit, he organised it that Elizabeth should have her wish.

She and Robert were escorted by parishioner Alan Walker, and were met at Christ Church by the Rev Clifford Skillen, who was happy to conduct the service of renewal of vows.

Elizabeth is the daughter of Elisabeth Matthews and James Houston. Her grandparents were Jane and Samuel Matthews of ‘Iona Cottage’ in County Antrim.

Elizabeth said: “The only relatives I remember the names of are William and James Matthews, the sons of Samuel. I have had no luck in finding any of their children, the only cousin, son to Willie Matthews and his wife Letty, nine months my senior, graduated the youngest graduate from Trinity College.

“This is the extent of my knowledge to any family.” 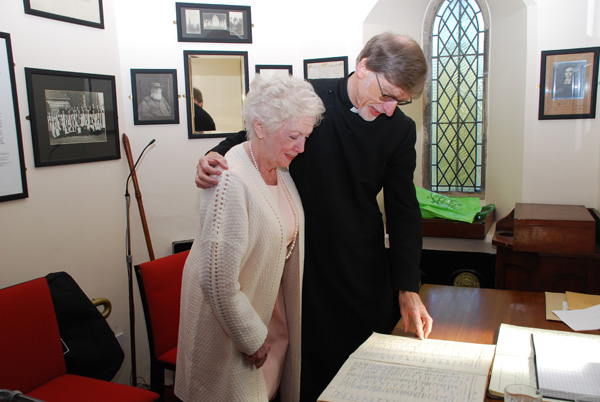 The Rev Clifford Skillen, who conducted the services of renewal of wedding vows, show Elizabeth the entry of her birth in the baptism book at Derriaghy. Photo: Alan Walker

Although the Caribbean Princess was only eight hours in port at Belfast, Elizabeth told Canon Budd that it was her wish that since she could not contact any family in Ireland, she would like to revisit the church her parents had attended.

She said her mother had come back to Northern Ireland to see her parents in the late 50s, and since then Elizabeth has carried a picture of the ‘lovely church’ at Derriaghy.

“I would with all my heart consider it an honour if we could have a very brief service just the minister, my husband and I and take a few photographs,” she wrote to Canon Budd before her visit. 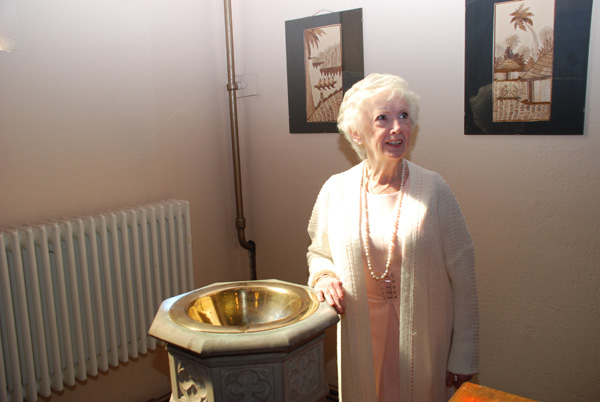 Elizabeth at the font at which she was baptised. Photo: Alan Walker.

The couple were blessed with glorious sunshine on the day of their visit. After the service conducted by Mr Skillen, they saw the register of Elizabeth’s birth recorded in the Christ Church baptism book. They toured the church, the graveyard and grounds and had lunch in a local restaurant before returning to Belfast Port.

Mr Skillen said afterwards: “It was a very emotional but happy occasion. It was a great honour and joy to be able to officiate at the service.”