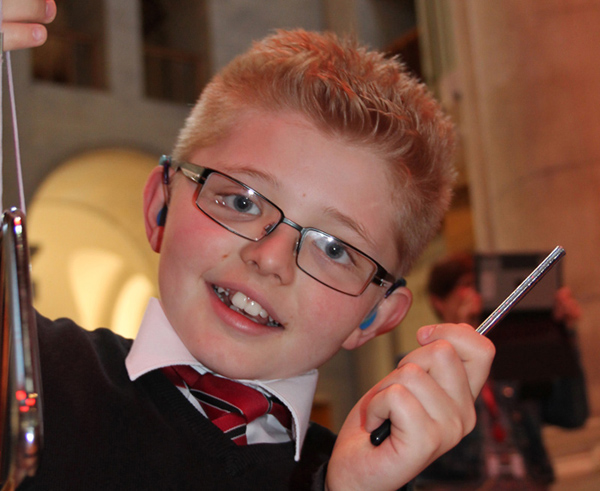 A young man from Jordanstown School enjoys making music on the triangle on day two of the competition.

The inaugural St Anne Trust Belfast Primary School Choir of the Year competition was an overwhelming success with pupils from 14 schools doing themselves and their schools proud.

The competition was organised by the Trust, which was established in 2016 to advance education, arts, culture and heritage by promoting good relations, particularly in communities significantly affected by conflict, diversity or deprivation.

Protestant, Catholic and integrated schools were all represented in the competition which took place in the impressive surroundings of St Anne’s Cathedral on Wednesday May 10, with special schools taking part on Thursday May 11.

In a close contest on the first day, Harding Memorial Primary School picked up the title, with Victoria College Prep in second place and St Anne’s Primary School in third.

But this was a day when everyone was a winner, and when every face wore a smile. Certainly no one envied adjudicator Donal McCrisken his task!

The schools were welcomed by Dean’s Vicar, the Rev Canon Mark Niblock, and Mr Joe Watson of the St Anne Trust.  “It is my hope that the children shall enjoy the day and cherish the memory for many years to come,” Mr Watson said.

The choirs all sang two songs and finished with a communal singsong led by St Anne’s Assistant Master of the Choristers Thérèse Woodfield. The awards were presented by Michelle McCutcheon representing Abbey Insurance, major sponsor of the competition, and Ciaran Scullion, Head of Music at the Arts Council NI.

Ms McCutcheon told the children, teachers and families: “It is an absolute treat to be here. I have been blown away by the music I have heard, and the hard work you have put into this is very evident. As far as I am concerned, each and every one of you is a winner.”

Mr Scullion congratulated the St Anne Trust on a ‘fantastic competition.’ He said: “Competitions like this are very important. They are a reminder of the great work going on in our schools and provide a platform for the children to perform.”

Announcing the winners, Mr McCrisken gave a short critique of each school’s performance – critiques that were full of praise, along with some good advice from an expert.

“What a wonderful morning we have had. It has been uplifting, entertaining, spiritual and refreshing. Not just the quality of the pieces, but the very fact that you are here and paying tribute to the wonderful act of singing,” Mr McCrisken said.

“Being in a choir is a wonderful experience. It makes you feel good and helps with getting on with other people. It enhances every aspect of our lives.”

Before the pupils returned to their schools, each with a badge stating that they had sung in St Anne’s Cathedral, the Bishop of Connor, the Rt Rev Alan Abernethy, sang a blessing. 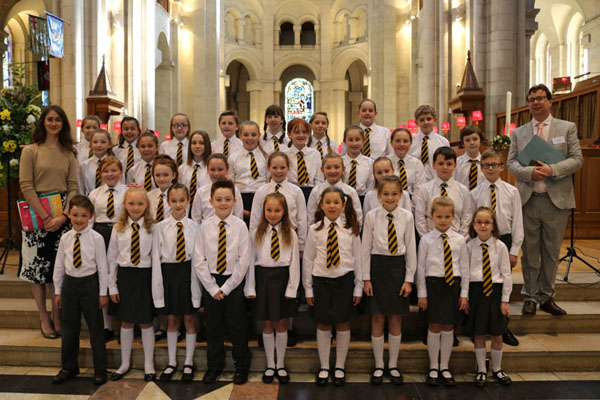 A former pupil of the winning Harding Memorial Primary School himself, the Bishop said he chose to sing the Blessing in tribute to his old primary school teacher Ms Griffin and in recognition of the wonderful singing he had heard that day.

It was the turn of pupils from two special schools, Jordanstown School and Harberton School, to show their singing talents on day two of the competition.

Cliona Donnelly, general manager of Northern Ireland Opera and a Director of the St Anne Trust, had arranged a workshop which was energetically led by three young singers from NI Opera, Laura McFall, Elaine Pelan and Kristine Donnan.

Every child had the opportunity to shake, rattle and bang a variety of musical instruments as they joined in singing and dancing. They paraded around a cleared ‘stage’ at the front of the Cathedral, they had great fun stretching, and hiding under, colourful pieces of fabric, and singing Somewhere Over the Rainbow waving colourful scarves which had many an observer (and even one of the children) dabbing their eyes!

After all the fun and games, there was a break for refreshments before the serious section of the day began – the competition!

The children from Jordanstown School were up first and performed the songs World in Union and Sing. As many have hearing difficulties, the children also signed the words to the song.

Harberton School also rose to the challenge, singing I Love My Life and Change the World, with fantastic hand actions to accompany the singing.

Among those watching the competition over the two days was Bishop Alan Harper, former Archbishop of Armagh, who said it had been a ‘brilliant’ event. “This is cross community and totally inclusive, not least because a special place has been made for children with special needs, and that is very important.”

He said the Cathedral was a place of ‘hope, joy and everything that is good,’ adding: “I don’t see anyone without a smile on their face.”

Mr Sam Murray, conductor of the Jordanstown School choir, said: “The children are loving it. It is great even just to get out, although coming into the Cathedral was a little daunting at the start.”

The performance of both choirs was critiqued by Walter Sutcliffe of NI Opera who thanked the children and their teachers for making it such an ‘enriching morning.’

“You make a beautiful sound and may you always keep enjoying it,” he said. 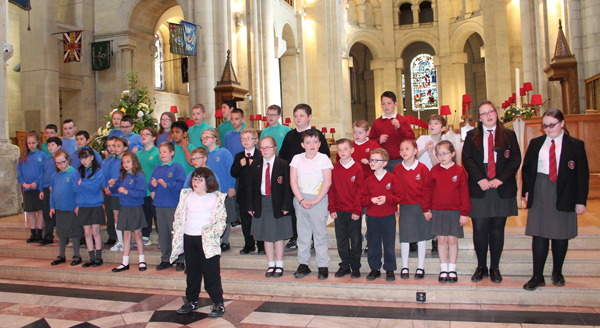 The choirs from Harberton and Jordanstown schools sing together at the end of the second day.