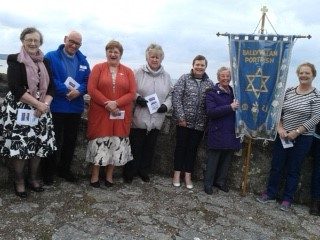 MU Members and the visiting Presidents in Ballintoy.

This year Mothers’ Union in Ireland celebrates 130 years, 13 Decades of Love and Service, and to mark this milestone a number of events have been held in Connor Diocese.

The major celebration – The Mothers’ Union Way – was a pilgrimage by All Ireland President, Phyllis Grothier, to visit members in all 12 dioceses.

Between May 12 and 14, Phyllis, accompanied by the Worldwide President, Lynne Temby, visited members in the dioceses of Clogher, Derry and Raphoe, Connor, Armagh and Down and Dromore!

After meeting members from local branches, the Presidents travelled along the coast road to Ballintoy to meet more members and take part in a short worship service.

From there the pilgrimage moved on to Holy Trinity in Ballycastle, where the first branch in Connor Diocese, Ramoan, is celebrating its 125th anniversary!  The Parish Centre was packed with members eager to meet the presidents!

After tea, speeches, and the cutting of two cakes, many members took part in a Prayer Walk around Ballycastle.

The day ended with a short service in the church. Lynne Temby spoke with her usual passion about Mothers’ Union. As a memento of a wonderful day, Phyllis and Lynne were presented with framed photographs of Ballintoy showing the church and Rathlin Island.