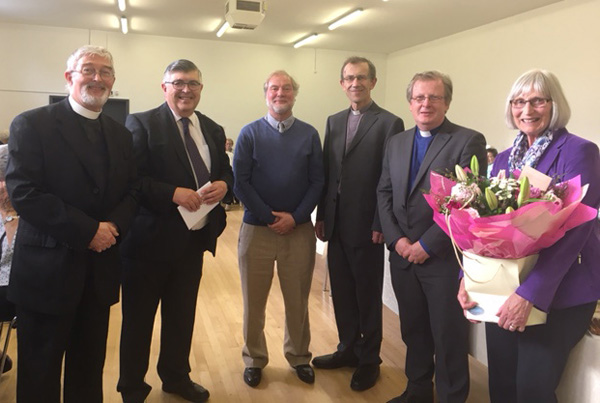 The evening of the second Sunday in June has for many years been the occasion when the combined choirs of Lisburn and Derriaghy Rural Deaneries pool their resources for a Choral Festival Service.

This year the service was hosted by Glenavy Parish in St Aidan’s Church. The choral service and supper that follows have been an opportunity for the parishes of Lisburn and Derriaghy to build fellowship one with another and for the choirs to participate in a service which reflects the liturgical and musical traditions of the Church of Ireland. It is an evening where the local choirs are stretched as they learn new material, which can be brought back into their own parish context.

This year marked the close of a long association between Professor Alan Hibbert MBE, his wife Gina and the combined parishes of Lisburn and Derriaghy.  Alan, formerly a parishioner of St Colman’s, Dunmurry, has for many years been the Director of the Choral Festival, and he and Gina are retiring to England.

At the supper after the service, Alan reflected on those years and remembered his first outing at All Saints, Eglantine, in 1992 – meaning he has had oversight of the service for 25 years!

Alan added that friendship and fellowship in music was the principal motivation for this annual service and that it was a pleasure to have been part of this service over those years.

The Rural Dean of Derriaghy, the Rev Canon John Budd, speaking on behalf of the parishes and their choirs, thanked Alan for his commitment to the Choral Festival Service. Canon Budd also referenced Alan’s and Gina’s involvement in other aspects of Connor Diocese, in particular his work at the Chaplaincy at Queen’s and Gina’s as a Diocesan Lay Reader.

Canon Budd wished Alan and Gina God Blessing in retirement in England and a presentation was made to them both on behalf of the combined Parishes of Lisburn and Derriaghy.