Menu
Home > Featured on homepage > Celebrating the ‘Class of ‘67’

Celebrating the ‘Class of ‘67’ 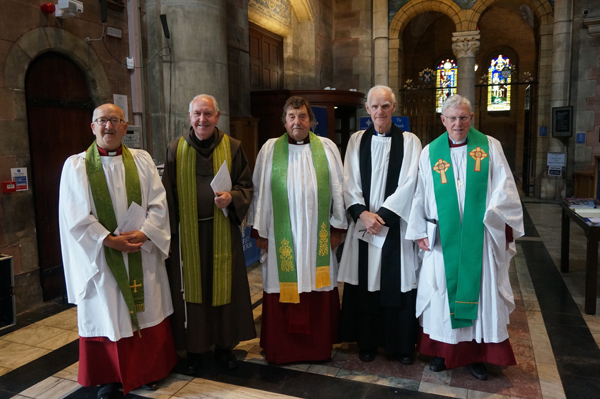 At the special Eucharist to mark 50 years since the ordination of the ‘Class of ‘67’ from the Divinity College are, from left: The Rev Canon William Bell, the Rev Canon Brother David Jardine, the Rev Canon Robin Lavery, the Rev Alan Parkill and Dean John Bond.

The Very Rev Jond Bond, former Dean of Connor, was the preacher at a special Eucharist in St Anne’s Cathedral, Belfast, on Sunday June 25, celebrating 50 years since the ordination of the ‘Class of 67.’

Of the 18 ordinations from the Divinity College  in 1967, six were ordained in St Anne’s on June 25 that year by the Rt Rev Cyril Elliott, the then Bishop of Connor.

They included Dean Bond, who organised the service to mark this 50-year milestone. He contacted as many of those ordained that year as possible and of the 18, five of the ‘Class of ‘67’ were present in St Anne’s for the service.

As well as Dean Bond there was the Rev Canon Robin Lavery, the Rev Canon William Bell, the Rev Alan Parkhill, and the Rev Canon Brother David Jardine. The former Dean of Belfast, the Very Rev Houston McKelvey, was also ordained in St Anne’s in June 1967, but could not attend the service as he was in Canada.