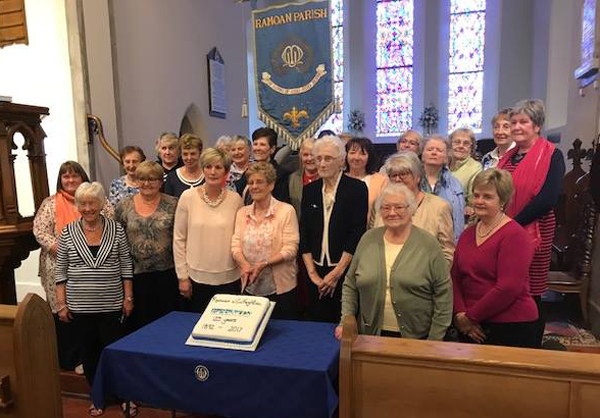 Members of Ramoan MU celebrate the 125th anniversary of the branch – the oldest in Connor Diocese.

Congratulations to Ramoan branch of Mothers’ Union, which was founded 125 years, ago, just five years after Mothers’ Union began in Ireland, making Ramoan the oldest branch in the Diocese of Connor!

Ramoan Mothers’ Union was formed in 1892 by Mrs McNeill. The meetings were held in her home in Quay Road. Her uncle was a former Dean of Ripon. In 1969 Ramoan joined with its sister church Culfeightrin. The rector’s wife Mrs Perrin was Diocesan Overseas rep for 12 years. During that time two Overseas Workers from Korea and Sudan stayed in the Rectory.

Romoan and Culfeightrin hosted the diocesan celebration for the Mothers’ Union Way in Ballycastle, in May, when the Worldwide President, Lynne Tembey and All Ireland President Phylls Grothier visited the diocese as part of the 130 year celebrations. The celebrations included a Prayer Walk and a Church service.

At the service of thanksgiving for 125 years of Mothers’ Union in Ballycastle, conducted by the Rector, the Rev David Ferguson, the oldest member, Mrs Gina Wisner cut the cake.