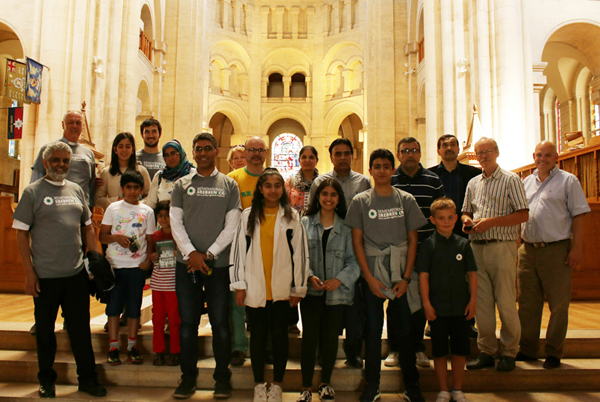 The Rev Colin-Hall Thompson, back left, at St Anne’s Cathedral with the ‘Remembering Srebrenica’ group.

Belfast Cathedral received a visit from members of the Northern Ireland branch of ‘Remembering Srebrenica’ on Sunday July 16.

The group met to walk to St Anne’s from Belfast City Hall as part of the commemoration of the 22nd anniversary of the genocide in Srebrenica, a town in Bosnia-Herzegovina.

The massacre on July 11 1995, which took place during the Bosnia War, killed more than 8,000 people, the victims being mainly Muslim men and boys.

The group was accompanied by the Rev Colin Hall-Thompson, Church of Ireland Chaplain to the Mission to Seafarers, Belfast, who was asked to join the fledgling Northern Ireland ‘Remembering Srebrenica’ soon after its establishment last year.

‘Remembering Srebrenica’ is an inter-faith group which aims to honour the victims of the genocide; to learn lessons from those events and to seek to build better, safer and more cohesive communities for all.

As chaplain to the Mission to Seafarers, much of Colin’s work is with people from other faiths.

To mark the anniversary and to honour the memory of the victims of the genocide, the group hosted a commemoration event at Belfast City Hall on July 10, when they were joined by survivors who spoke about their experiences 22 years ago.

Colin said: “We try to keep the memory of the massacre alive and remember it for the purpose of peace and reconciliation.”

Colin visited Srebrenica in May this year with an inter-faith and cross-sectoral delegation led by the Chair of ‘Remembering Srebrenica’ Northern Ireland, Peter Osborne. Victims Commissioner Judith Thompson also took part in the trip

The visit aimed to remember those who lost their lives in the genocide and to learn about the challenges that victims and survivors still experience many years later. Learn more.

Colin said the commemoration events this month were the first organised by this new Northern Ireland ‘Remembering Srebrenica’ group. He added:

“Where we go from here in terms of promotion remains to be seen, but we have all pledged to be involved in activities to remember Srebrenica and to promote peace and reconciliation.”