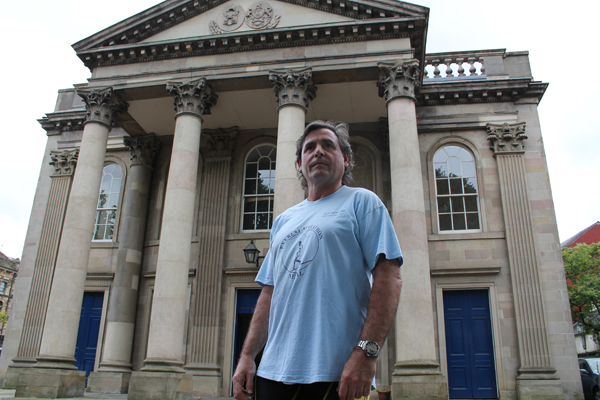 Ultra-marathon runner Ken Tate outside St George’s Parish Church, Belfast, where he is Sexton. Ken is now in training for the Everest Marathon in November.

Ken Tate, Sexton at St George’s Parish Church, Belfast, will revisit the Himalayas to take part in his second Everest Marathon this November.

Since then, Ken has satisfied himself with walking, including a 150km hike along the Camino de Santiago, but the temptation of doing a final Everest Marathon was just too much for the Belfast man.

Ken took up running in his forties, and did his first marathon in Belfast on his 50th birthday. Since then, he has participated in various city marathons, and his adventure races and ultra-marathons have taken him to many international locations. 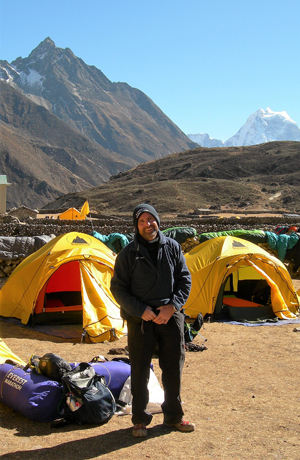 Now, despite admitting his toughest challenge ever was the Everest Marathon he completed 10 years ago, Ken is all set to do it again!

There have been 16 Everest Marathons since the first one was held in 1987. Starting at Gorak Shep at 5184m, close to Everest Base Camp, and finishing in the Sherpa ‘capital’ of Namche Bazaar at 3446m, this is considered the world’s most spectacular race.

There is likely to be snow and ice at the start of the course and along the 26.2 mile route the terrain is very varied with boulders, grass, sandy scree, stone staircases, trails through forest and exposed paths along the mountain sides. Additional hazards include narrow suspension bridges and yak trains. The course is not marked and each runner has to learn the route on the trek up.

In order to acclimatise naturally to the high altitude, each competitor takes part a 15 day trek in the Everest region which allows time for high altitude training under medical supervision. Before the race most people will climb both Gokyo Ri (5483m) and Kala Pattar (5623m).

Ken will be raising funds for the charity which organises this unique race – the UK-based Everest Marathon Fund. The Fund supports charities in Nepal, one of the poorest countries in South Asia. The people continue to battle the effects of the devastating earthquakes of April and May 2015.

The Fund gives its money to charities which already have a continuous development programme and work with local people at grass roots level, spending very little on administration. Since 1987, the Fund has raised more than £630,000.  Learn more about the Everest Marathon Fund here.

Evidence of the poverty people in Nepal live in was all around him when he was last in Nepal, and Ken said the situation had been made worse by the 2015 earthquakes.

However, deciding to enter something like this and being accepted to compete are two different things. Ken’s previous participation would have stood him in good stead, but his application last November had to be supported by doctors’ certificates confirming his good health and evidence that he will in fact be fit enough to compete in this challenge.

To allow for acclimatisation, all competitors have to commit to 26 days in the region.

Ken Tate during the 2007 Everest Marathon – a feat he intends to repeat this November.

Ken said: “The number of runners is limited to 75 non-Nepalese with up to 20 Nepalese runners. Taking into account our non-runners and medical staff we will have a trekking group numbering around 100 plus Sherpa porters and guides.”

After completing the 2007 Everest Marathon he said he would never do it again. “To me it was a once in a lifetime experience, but then the opportunity came up again this year and as it is the last chance I will have to take part [there is an upper age limit] I decided to apply. I also felt that this would give me the opportunity to contribute something to Nepal, particularly after the earthquakes.”

He anticipates the 42km will take him at least twice as long as a normal marathon. “It is a long, long race along terrain that goes up and down, up and down. I think it will take me around eight hours,” he said. “In ’07 I was running with a broken shoulder and this slowed me down a little. This summer I’m staying well away from motorcycles, push bikes and skis!”

The race itself is the easy part, according to Ken. “The difficult part of the whole endeavour is getting to the start line in good health. That is why we spend so much time trekking in. It is critically important that we are properly acclimatised.

“This time round I have a good idea of what’s involved which makes what I am attempting to do even more lunatic!”

Ken, however, is no stranger to running in extreme conditions. In Mongolia, for example, the Sunrise to Sunset ultra-marathon took place during the country’s brief summer and covered 100km in one day. An adventure race in Mali, west Africa, was run over six stages on varying terrain, while a Sahara run, another staged event, had different challenges. “We had to run in deep sand on a couple of stages, while other parts were quite mountainous,” Ken explained. 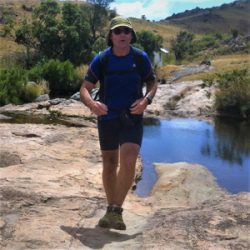 The 140km Madagascar run took in the second highest peak in Madagascar and Ken was the only English speaking competitor, both of which presented him with a challenge!

And just because he did not succumb to Acute Mountain Sickness last time he was in the Himalayas, there is no guarantee he will not be affected this time. “There is no way that doctors can predict how humans will react to altitude. All you can do is follow the best medical advice and acclimatise slowly. A full medical team backs up the whole expedition. Of those who start the race, around 90 per cent will finish it,” Ken said.

The last time there was a blizzard the day before the race prompting a debate as to whether to move the start lower down. On the advice of the senior Sherpa it was decided the marathon should go from the start line as planned.

Ken is anticipating snow and ice in the early stages of the race but things will warm up as the runners descend. “Last time it was -5 degrees when we started at 6.30am but was up to 25 degrees when we got down to the finish,” he said.

His training is already well underway. At present he is running 50km per week, with a long run of around 20km per week. “Before I go I will be aiming to be doing around 100km a week with a weekly long run of 30km,” he said. “I do most of my running in places like Black Mountain and Cave Hill and other off road paths. I avoid running on the road. It puts a lot of strain on the skeleton and I don’t particularly enjoy it. 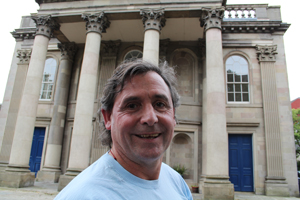 Ken Tate who is preparing for the Everest Marathon in November.

On race day, Ken will set out running in his warm down jacket, and will discard clothing at the first aid stations as he descends and as the temperatures rise. The rules state he must carry his own safety equipment for the entire race.

Runners tend to spread out as the race progresses. “Our numbers are checked as we pass different points to ensure everyone is accounted for,” Ken said. “There have been no fatalities since this race began, there is such a strong medical team on board.”

Race organisers are mindful of the environmental impact on this busy Everest base camp site. All supplies are carried by foot or hoof, no wheeled vehicle can access the site due to the terrain. Helicopters can pass over, but this is a dangerous business. The wreckage of a Russian helicopter close to the start of the race is a testament to the dangers of flying in these mountains.

During the acclimatisation period, the competitors and their team will be well fed by Sherpas who will carry their tents and other equipment.

It is important that the competitors eat well. “Because of the conditions and the cold you don’t want your body fat percentage to be too low. And you don’t want to lose too much weight. We are fed plenty of nutritious but monotonous food, no meat, but lots of tinned fish and spam!”

Ken recalls that at the end of the last Everest Marathon he could not wait to tuck into a yak steak!

On the actual race, they will carry energy foods to keep their bodies fuelled during the gruelling run. At the end, Ken and the other competitors will donate their mountain kit to the Sherpas.

Looking forward to the marathon, Ken said: “I feel very grateful for the privilege of being given the chance to once again set foot in a unique and sacred place – the Tibetans call it Chomolungma, Goddess Mother of Mountains.”

You can sponsor Ken online by visiting www.virginmoneygiving.com/kentate or make a donation at St George’s Parish Church.