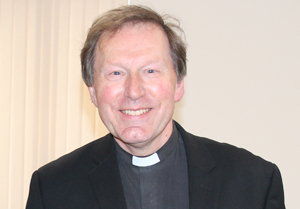 After writing more than 200,000 words over an almost four year period, the Dean of Belfast, the Very Rev John Mann, today sets aside the metaphorical pen from which flowed the Dean’s Blog.

Since he began blogging on the Belfast Cathedral website in November 2013, the Dean has kept up a twice weekly flow of news and reflections on life in the Cathedral, his garden, his home, nature, sport, music and a host of other topics.

He even took time to Blog for the website when on holiday! Dean Mann has won the ‘Most Engaging Blog’ category in the Church of Ireland Communications Competition for the last two years.

But, likening the future to the late Seamus Heaney’s ‘gate,’ Dean Mann is now preparing for his move to his new role as team rector of the Parish of Swanage with Studland in the Diocese of Salisbury.

You can read his final Blog below.

This is my 412th and final blog for the St Anne’s website. Looking back to when it started in November 2013, after I wrote a series of daily blogs from a Holy Land pilgrimage, it was seen as a vehicle for keeping the website changing, whether we had something in the news or events at the Cathedral to mention or not. At the same time drip-feeding little bits and pieces of St Anne’s information to parishioners who might not otherwise hear of them.

Of course, there was always going to be padding, and that has come in the form of comment on the things that interest me, or that I happen to have noticed.  Readers have very kindly encouraged me to keep going.

However, with leaving St Anne’s in September (my last Sunday is to be 3rd September, though Helen and I will be about the following week, including being at the Mothers’ Union branch meeting on 9th September) it has to finish sometime, and we have chosen to make it today.

As you can imagine, given this has been three and a half years of twice a week writing of an article averaging 500 words, I am going to miss it.  Our family and the staff in the Cathedral office are always wary of my saying on hearing a word said or a funny incident arising, “I could make a blog of that” – though I rarely did.

The image that I would like to leave is that of the gate.  An object that is designed to be opened, be looked over, and finds itself looked at.

Seamus Heaney, in a memorable poem in his collection Seeing Things entitled “Field of Vision,” describes the visits to a woman in a wheelchair whom he remembers staring through the window and beyond.  He opens for us the thought of how what we notice with our eyes is affected by our perspective.  He very clearly understands that this woman is not mentally and emotionally confined by what is physically controlling her life.  He mentions

She never lamented once and she never
Carried a spare ounce of emotional weight.

It reminds me of my father’s words after he suffered a stroke at the age of 57.  He used to say, “I never ask the question, “Why me?

But then Heaney ends the poem in such an interesting and arresting way.  He speaks of a country gate, ‘well-braced’ where you could see

Deeper into the country than you expected
And discovered that the field behind the hedge
Grew more distinctly strange as you kept standing
Focused and drawn in by what barred the way.

This speaks into more than one of life’s scenarios.  In moving on, there is a good deal of leaning on the gate, not to mention glancing over one’s shoulder; there is the standing back and focusing on the barrier, which draws us into the unknown and strange; and then there is the invitation to open it, walk on in and familiarise oneself with what lies in view, but is, as yet, untouched.