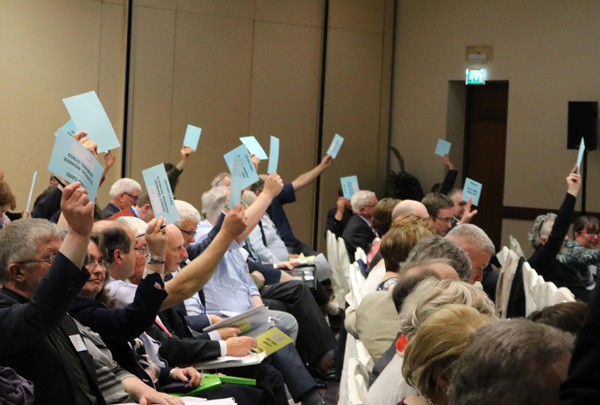 As a new triennium of the General Synod begins in 2018, it may be useful to look back at the Synods of 2015-2017, and at some of the legislation passed during those three years. In 2015, Synod was held in Armagh, which is a familiar venue to Synod members, but in 2016 and 2017 travelled to new venues – Dún Laoghaire and Limerick.

During the triennium, Synod has welcomed ecumenical guests from seventeen different Churches, and has marked its remembrance of significant anniversaries and events, including the centenaries of the sinking of the Lusitania, the Battle of the Somme and the Easter Rising. Synod has linked in with the work of the Church of Ireland with communities in Ireland and abroad in a number of ways e.g. through an annual breakfast talk is hosted during each Synod by the Council for Mission and a new session (at this year’s Synod)  illustrating ways in which Church of Ireland communities serve their neighbours. The 2016 General Synod included the launch of a report on research into the communities, cultures, benefits and challenges of small primary schools in the Republic of Ireland (Small Schools: Value for Learning).

Legislation is the primary purpose of the Synod, and the legislation it enacts is for the whole Church of Ireland. Proposals for legislation are brought in the form of bills, which are considered and become Acts or Statutes if approved. Less formal proposals are submitted as motions which, if approved, become resolutions.

In 2015, the Dignity in Church Life Charter was adopted in statute by Synod. This Charter commits the Church to promote harmonious relationships across all the structures of the Church of Ireland, to uphold the right of all to be treated with dignity and respect, and to seek reconciliation where there is disagreement or conflict.

Synod also adopted an Environmental Charter as a resolution which charges members of the Church of Ireland as individuals and as part of the worshipping community, to exercise stewardship of God’s creation, locally, nationally and internationally, through initiatives such as recognising and reducing waste, increasing environmental awareness across parishes, exercising leadership through environmental responsibility, identifying spiritually and practically with the developing world, and influencing policy and the Church and State.  The Charter concludes with the reminder that in all of this, prayer for decision-makers and those who are impacted by environmental issues should be at the heart of the Church’s response.

A bill to provide for changes in the procedure for episcopal elections was passed in 2016,.  Other significant bills include one to ensure compliance of select vestries with state legislation in both the Republic of Ireland and Northern Ireland and one to alter the terms of the Church Fabric Fund (now known as the Church Fabric and Development Fund). This was first established by General Synod in 1930 and the changes are designed to encourage and develop the use of the fund for restoration or repair of the fabric of any church or chapel used for public worship and vested in the Representative Body and/or the development of initiatives supporting the long-term mission of the Church.

Resolutions passed included one proposed by the Council for Mission, which asks the House of Bishops to remind the Irish Government to implement the key recommendations of Protection, Resettlement and Integration: Ireland’s Response to the Refugee and Migration ‘Crisis’.  Another resolution affirmed the importance of children’s ministry as a central, fundamental and integral part of the life of the Church of Ireland.

Bills in 2017 included special bills (which are brought to two successive Synods for approval) to amend The Book of Common Prayer by including An Order for Morning and Evening Prayer for use on Sunday, and by authorising the use of new Collects of the Word.

Another bill ratified the Facilitation Committee that had been established earlier in the year by Standing Committee. The Facilitation Committee will engage in discussion with all twelve dioceses about the issues raised by the work of the Commission on Episcopal Ministry and Structures, facilitate exploration of any proposals that may arise from such conversations, and provide an annual report to the General Synod.  Synod also passed a resolution to encourage the United Dioceses of Limerick and Killaloe and the United Dioceses of Tuam, Killala and Achonry to continue their talks and to bring further proposals to next year’s General Synod.

A resolution was passed on climate change and fossil fuels to affirm that the Representative Body supports the Environmental Charter, and, among other things, will exclude companies whose turnover (in excess of 10%) is derived from the production of coal or tar sands in recognition that these companies are unlikely to be able to assist with the transition to a low carbon economy, aims to increase its exposure to green alternatives, to reduce its exposure to oil and gas producers, and to seek companies with good environmental policies that are committed to reducing their carbon footprint.

Links to resolutions and resources mentioned above are available at www.ireland.anglican.org/gsreview2015-17