Institution the Rev Peter Jones as rector of Mossley Parish 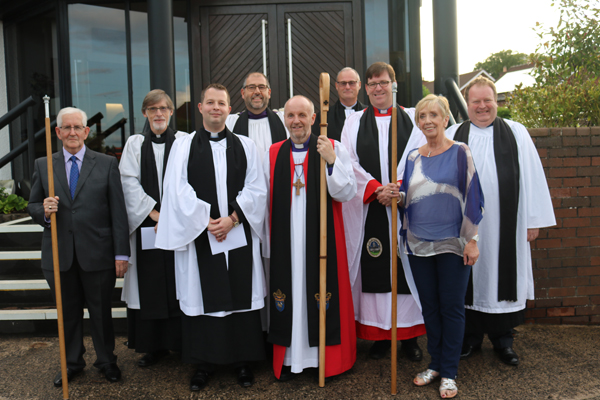 The institution of the Rev Peter Jones as rector of Mossley Parish took place in the Church of the Holy Spirit on Wednesday evening, August 23. 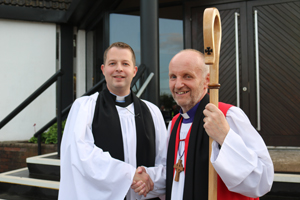 The Bishop of Connor, the Rev Alan Abernethy, congratulates the Rev Peter Jones on his institution as rector of Mossley Parish.

Peter was curate assistant in Drumglass Parish, Armagh Diocese, before his appointment to Mossley. Aged, 35, Peter is married to Kim and they have two young children, Timothy and Hannah.

Originally from Tobermore, Peter is a former pupil of Rainey Endowed School in Magherafelt, and read History at the University of Ulster in Coleraine. After graduating, he did a PGCE and taught history for eight years at Lisneal College in the Waterside, Londonderry. He was involved in administration and pastoral care and was a Year Head. He was also a Principal Examiner in GCSE History. 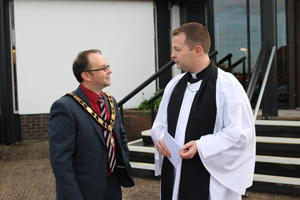 The new rector of Mossley, the Rev Peter Jones, greets the Lord Mayor of Antrim and Newtownabbey Borough Council, Councillor Paul Hamill, at the service of institution on Wednesday August 23.

Peter trained at the Church of Ireland Theological Institute and was ordained a deacon in 2013. He served an internship in Maghera Parish and after being ordained a priest in 2014 he was curate assistant in Drumglass.

Peter said he and Kim were looking forward to getting to know the people in Mossley parish and ministering to them. “We felt a real strong sense of God’s call,” he said.

Peter was instituted as rector by the Bishop of Connor, the Rt Rev Alan Abernethy. Preacher at the service was the Ven Andrew Forster, rector of Drumglass and Archdeacon of Ardboe.