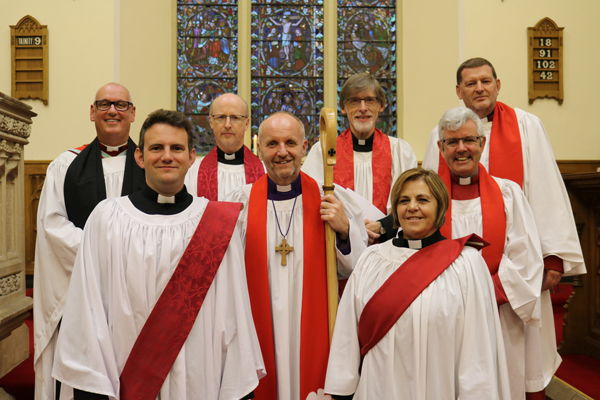 Two new Deacons were ordained in Connor Diocese at a service in All Saints’ Parish Church, Antrim, on Thursday August 24. 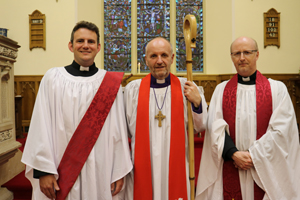 Ian Mills is congratulated on his ordination as a Deacon by Bishop Alan Abernethy and the Rev Stephen Fielding, rector of Agherton, where Ian will serve his internship.

Ian grew up in Derry where he was a Chorister in St Columb’s Cathedral. He did A-levels at Foyle College before studying a Bachelor degree, a Master’s degree and eventually a PhD in Music at Queen’s University, Belfast.

Before studying at the Church of Ireland Theological Institute, Ian worked as Organist and Master of the Choristers in Derry Cathedral under the leadership of the Very Rev William Morton, now Dean of St Patrick’s Cathedral, Dublin. He also kept a busy freelance schedule as a recitalist and accompanist, and taught in St Malachy’s College and Methodist College, Belfast. Ian was also involved in making music with various choirs and ensembles.

He is married to Kelly-Ann, a Registrar in Obstetrics & Gynaecology in the Royal Victoria Hospital and a Lecturer in medicine at Queen’s University.

His many interests include aviation, gardening and, unusually, the architecture of the London Underground!

Ian said: “As part of my vocation I feel strongly that the Church should meet people ‘where they are at’ on their individual journeys of faith. Looking forward towards Ordination and Parish Ministry, I am keen to develop this Pastoral aspect of ministry while encouraging people into closer encounter with God through the beauty and gift of music and liturgy.” 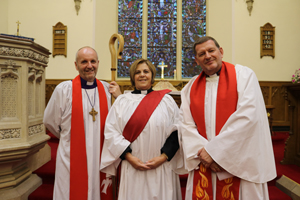 Heather Cooke is congratulated on her ordination as a Deacon by Bishop Alan Abernethy and the Rev Canon James Carson, Minister in Charge of the parishes of St Michael, St Stephen and St Luke, Belfast, where Heather will serve her internship.

Heather is originally from Carnmoney, Newtownabbey, and now lives in Carrickfergus. Her home parish is St Brigid’s, Mallusk.

A former primary school teacher, Heather is married to Edwin, and they have four children, Jenni, Alastair, Adrian and Jason.

She enjoys music of all kinds from classical to pop and opera to musical, and plays the piano and guitar. Heather also loves going to the theatre, cinema, fine dining, reading, walking, swimming, dancing, travel and writing.

She said she was ‘very excited’ about joining the team at the Church of Ireland Lower Shankill (COILS).

Ian and Heather were ordained Deacons by the Bishop of Conor, the Rt Rev Alan Abernethy, Preacher at the service was the Ven Dr Stephen McBride, Archdeacon of Connor and vicar of Antrim.