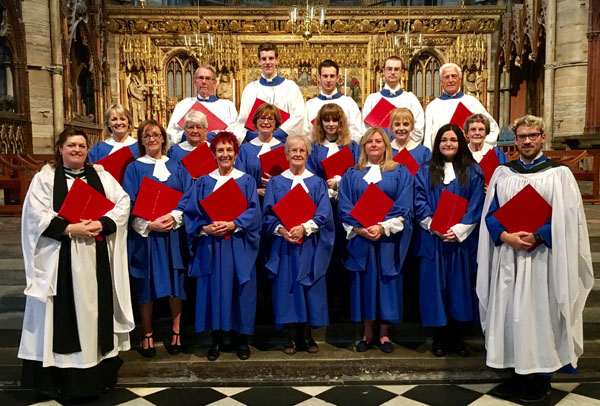 The choir of St Polycarp’s is pictured in Westminster Abbey prior to the Tuesday Choral Evensong service, with Simon Neill and the Rev Louise Stewart, the rector of Finaghy and Upper Malone, extreme right and extreme left respectively. (Photo: Nigel Harris)

The choir of St Polycarp’s, Finaghy, Belfast, have been back to sing Choral Evensong in Westminster Abbey, London, for the third time in five years!

The choir sang in the Abbey on Monday August 7 and Tuesday August 8. They also sang Choral Evensong here in August 2013 and 2014 and were invited back by the Dean and chapter to sing again this year.

Last year, the choir sang in Chester Cathedral and in 2015 in the chapels of three Cambridge Colleges.

This year, choir members were supported by spouses and by friends and relatives living in London who travelled to the Abbey for the occasion. One former St Polycarp’s chorister, who last sang in the choir more than 30 years ago, came from his home in Grimsby especially to support the choir and to meet up again with former colleagues.

Conducted by St Polycarp’s Director of Music, Simon Neill, the choir sang Stanford’s settings of Magnificat and Nunc Dimittis in C on the Monday and settings by Tertius Noble in B minor on the Tuesday.

The choir also sang two anthems: on the Monday, Charles Wood’s setting of Henry Bramley’s O Thou, the Central Orb and on the Tuesday, John Ireland’s Greater love hath no man.

A hymn was also included in Monday’s service – ‘Tis good, Lord, to be here – to mark the Feast of the Transfiguration of our Lord.

The organist over the two days was Matthew Jorysz, Assistant Organist of Westminster Abbey and former Organ Scholar of Clare College, Cambridge.

Simon Neill said that for both for himself and the choir  it had been ‘an honour to return to Westminster Abbey and lead two services of Choral Evensong.’

Paying tribute to choir members, he continued: “I count myself extremely lucky to have such talented and dedicated singers in St Polycarp’s who give of their time so freely to venture on a choir tour each summer.

“In St Polycarp’s, we have a strong sense of family and friendship and I am indebted to the hard work and commitment of members to both choir and parish.”

He added: “I can hardly believe that this was our seventh summer choir tour. We look forward to seeing what the next academic year has in store for us as a choir and plans are already under way for an exciting year of music-making in St Polycarp’s.”

(Article courtesy of The Church of Ireland Gazette)