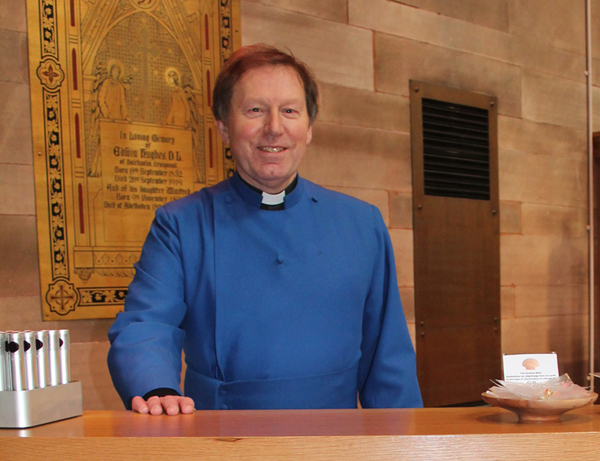 The Very Rev John Mann, who leaves St Anne’s Cathedral for a new post later this month, reflects on his six years as Dean of Belfast in an interview with BBC Radio Ulster’s Sunday Sequence.

The Very Rev John Mann reflected on his six years as Dean of Belfast, and on the challenges facing his successor, in an interview on BBC Radio Ulster’s Sunday Sequence programme, broadcast on Sunday September 3.

The Dean was a guest in the studio before returning to St Anne’s where he was preaching a Sunday Sermon for the last time before moving to the Parish of Swanage with Studland in the Diocese of Salisbury where he takes up the post of team rector.

Interviewed by presenter Roisin McAuley the Dean, who was born in Blackheath, London, recalled arriving in Northern Ireland as an undergraduate at Queen’s in 1973. He said he had gone through ‘clearing’ to secure his place doing Pharmacy, and hadn’t had time to find out much about Belfast.

“By Christmas I just felt at home,” Dean Mann said. “I suppose that is why I have stayed so long.” He said the Church of Ireland Student Centre in Elmwood Avenue had played a key role in feeding his faith and in his decision to become ordained rather than follow a career in pharmacy.

The Dean spoke about his reasons for leaving St Anne’s and said he and his wife Helen were very excited about the move to Salisbury Diocese.

“We are going to be very sad to leave St Anne’s, it is a wonderful place,” the Dean added.

The Dean was asked about the hope he had expressed at his installation to make St Anne’s an open space. “St Anne’s is a gift to the City and to Northern Ireland,” he said.

He spoke about the challenges facing his successor as Dean – and about those facing him and Helen as they make the transition back to parish life.

You can listen to the full interview (22 minutes into the programme).