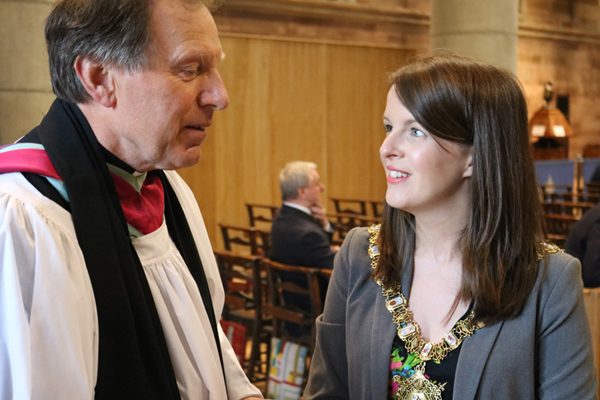 The community of St Anne’s Cathedral and the city of Belfast said a fond farewell to Dean John Mann and his wife Helen at Choral Evensong on Wednesday September 6.

Parishioners were joined by the Lord Mayor of Belfast and Her Majesty’s Lord Lieutenant at the service which was followed by a reception in the Cathedral. Photo Album.

Warm tributes were paid to the Dean and his wife Helen, who are leaving St Anne’s for the Diocese of Salisbury where Dean Mann takes up a new post as team rector of the Parish of Swanage with Studland.

Dean Mann has been Dean of Belfast for six years. Mrs Gillian McCaughey, honorary secretary of the Cathedral Board, said: “All Deans of this Cathedral leave their mark, not just because we put their names on the wall, but also because of their interaction with the Cathedral community and the city. John has left a mark which will be truly indelible.”

She said the Dean had overseen many changes within the Cathedral which were no less significant than the physical changes to the structure of the building which had taken place under his predecessors.

“His legacy is all around us, we see it in the development of the music department for which we are very grateful. We are grateful also for the development of the choirs including young people from the city and those who have joined us from other religious denominations and none. If we can bring them to experience this building and the fellowship of being a member of the church we will have achieved a great deal, and that is a significant and lasting legacy,” Mrs McCaughey said.

She described Mrs Mann as ‘the embodiment of Christian hospitality.’ Wishing the couple well in their new parish, Mrs McCaughey added: “You will be a joy and blessing to your new parish just as you have been to us.” 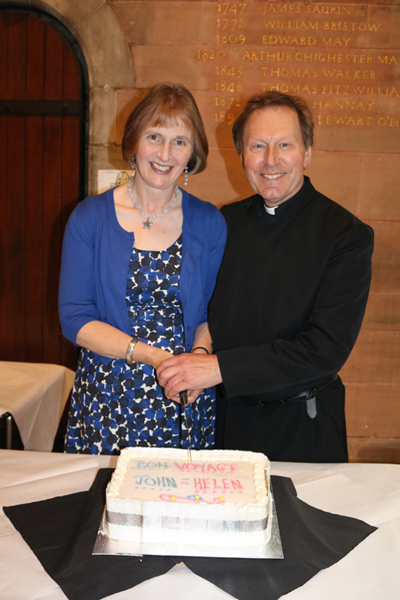 Dean’s Vicar, Canon Mark Niblock, spoke of the Dean’s ‘profound spirituality and humility. “As a colleague I appreciated the quiet, reflective, generous nature of carefulness that is your ministry,” Canon Niblock said. “Your heartbeat of prayer in this centre has been a gift. You have touched and blessed us in this congregation and in the city.”

The Rev Janice Elsdon, a member of the Cathedral clergy team, said Mrs Mann had made an enormous contribution to the Cathedral and wished her a speedy recovery from her recent illness.

The Lord Mayor of Belfast, Alliance Party Member Nuala McAllister, told the gathering that she had first met the Dean at a service that was open to all the people of Belfast, and it had been her first time inside the Cathedral.

“The work you do across our community to build relationships is something we respect and something that has made you a leader in Belfast,” the Lord Mayor said.

“I thank you for being yourself, for being true, for coming to Belfast and putting yourself forward and for opening this place to the whole of Belfast.”

Her Majesty’s Lord Lieutenant for Belfast, Mrs Fionnuala Jay-O’Boyle, recalled the welcome the Dean had extended to her as a ‘rookie Lord Lieutenant.’ When I first arrived at the Cathedral I was very nervous, but I knew when I got to the steps and saw you standing there Dean Mann that all would be well.”

Mrs Jay-O’Boyle spoke of the Dean’s ‘considerable dignity and gentle but firm authority.’ “As the representative of Her Majesty the Queen I have been honoured and privileged to be here at services John has resided over,” she said

In response to the speakers, Dean Mann said it had been ‘very humbling’ to work in a great building and a great city.

“I first came here in 1973,” he said. “The city has changed but there was still a sense that Belfast at its heart was a city that wanted to work together. It was just a matter of opening doors. There is so much here and we just pray it goes from strength to strength.”

The Bishop of Connor, the Rt Rev Alan Abernethy, paid tribute to Dean Mann for his ‘amazing ability’ to see music and liturgy as dependent on each other.

“You have a deep pastoral heart which has touched lives at their most difficult moments,” the Bishop said “