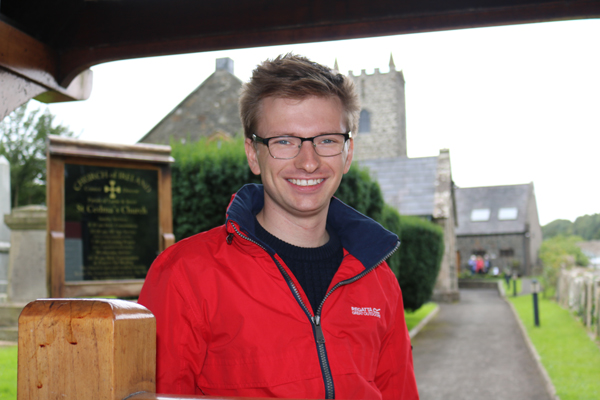 Oxford ministry student Jacob Mercer outside St Cedma’s, Larne, where he is doing a summer placement.

When ministry student Jacob Mercer, who is training at Wycliffe Hall, Oxford, was looking for a student placement for the summer, the parishes of Larne and Inver with Glynn and Raloo were the obvious choice.

Jacob and his wife Rebecca have strong links with the area, as Connor Diocesan Reader Peter McCausland, who did a placement as a Lay Reader in St Cedma’s, Larne, is Rebecca’s father!

Jacob will be entering the final year of his BA in Theology and will be ordained into the Church of England in June 2018.  He arrived for his placement in Larne on August 20 and will remain until September 24.

He, Rebecca and their nine-month-old son James are currently living with the McCauslands in Templepatrick while Jacob works with the rector of Larne and Inver with Glynn and Raloo, the Ven Stephen Forde, Archdeacon of Dalriada.

After graduating from Cambridge University with a degree in English, Jacob worked for a year as a ‘mover-of-chairs and cooker-of-food’ at his university church in Cambridge. It was here he got his first experiences of teaching the Bible and being involved in other aspects of Christian ministry.

Following his marriage five years ago, Jacob moved to Wimbledon where he worked for Emmanuel Church.  He writes in the Larne parish magazine: “By now I was convinced that there was no better thing I could do than serve a church somewhere by teaching, pastoring and caring for the congregation.”

After selection for ordination training, Jacob and Rebecca moved to Oxford in 2015.

Jacob said the placement in Larne particularly interested him because the family ties mean he may consider moving from Church of England to Church of Ireland after he is ordained.

“I have been over to Northern Ireland many times, but I did not know a lot about Larne,” he said. “I have enjoyed getting to know the people connected with St Cedma’s and the other churches in the group. Everyone has been warm and welcoming and very hospitable.”

With five Sunday services across the churches in this large parish, Jacob has been busy, particularly while the curate, the Rev Philip Benson, was on holiday. He has been leading services and preaching, visiting parishioners through the week, taking part in church meetings and shadowing Archdeacon Forde – “Basically seeing the day to day life of the rector,” Jacob said.

He added: “St Cedma’s is more traditional than the churches I have worked with in England. It has been helpful to me in terms of being involved in a church different from the ones I have been used to.”