Menu
Home > News > Historic Cairncastle tree up for an award

Historic Cairncastle tree up for an award 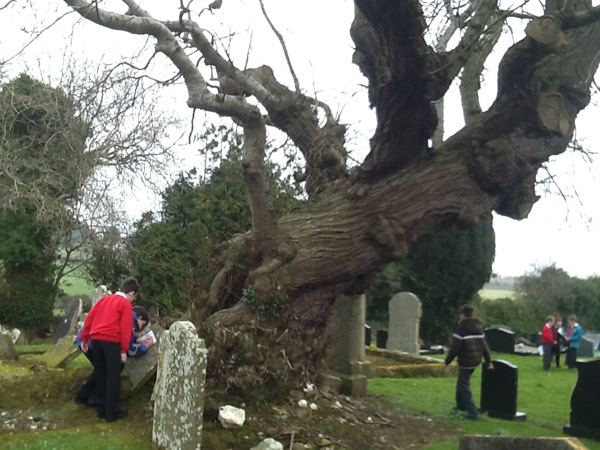 The ancient Spanish Chestnut tree is been a must-see sight in the graveyard of St Patrick’s, Cairncastle. Pupils from local primary schools are pictured checking it out during a visit in 2015. The tree is up for a Woodland Trust award.

An historic tree growing in the ancient graveyard of St Patrick’s Parish Church, Cairncastle, is a contender for Northern Ireland’s Tree of the Year Award.

This beautiful Spanish chestnut tree is said to stand on the spot where a shipwrecked Spanish sailor was buried at the time of the Armada.

According to local folklore, the sailor’s body was washed up in Ballygally Bay in 1588 after his ship was blown off course by gales. He was brought up to the churchyard for burial.   The tree then grew from a chestnut in his pocket, cutting through the earth of the unmarked grave. Chestnuts were eaten by sailors to ward off scurvy on their long voyages.

The tree has been analysed and found to date back to the 16th century, adding credence to the local legend. It is certainly true that many Armada ships were wrecked off the coast of Ireland and the grave of another drowned Spanish sailor exists in nearby Glenarm.

The Cairncastle tree is one of six shortlisted by the Woodland Trust for Tree of the Year 2017, and members of the public can vote for their favourite from the final shortlist. The winning tree will receive a care award of up to £1,000.

The trust wants ‘better protection’ for ancient trees and woodland, according to its director, Patrick Cregg. “This competition is just one way of putting our precious trees in the limelight, giving them the attention they deserve,” he said.

“By reminding people of their value, we hope they will continue to thrive for future generations.”

The other Northern Ireland contenders are in Lisnarick, County Fermanagh; the grounds of Foyle College/Londonderry High School; the Erskine House Tree, Belfast City Hospital; and a Weeping Ash in Main Street, Bangor and another in the corner of Newry’s Paupers’ Graveyard.

To find more, or to vote for the Spanish Chestnut in St Patrick’s, Cairncastle, visit the Woodland Trust website.