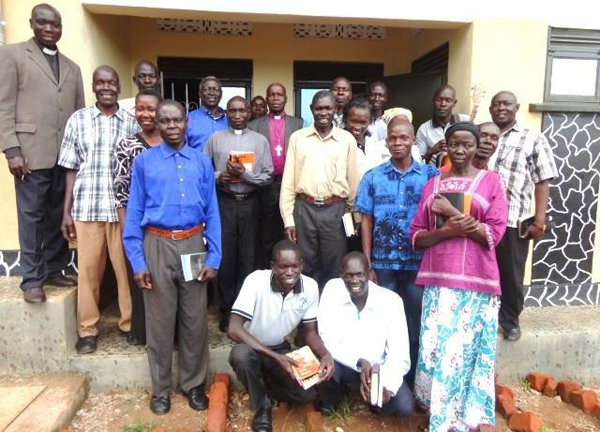 Students at the Bishop Allison Theological College which has reopened after being relocated from Yei to Arua, Uganda.

The situation in South Sudan continues to deteriorate, with one million refugees now living in Uganda having been forced to flee since war broke out two years ago.

Many people, however, remain trapped in Connor’s partner Diocese of Yei. Bishop Hilary of Yei has recently returned from the diocese’s temporary office in Arua, Uganda, to support his people in Yei. 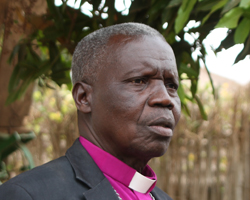 Bishop Hilary has returned to Yei.

In a message to Church Mission Society Ireland (CMSI) the Bishop stated that “thousands of people are still trapped in Yei,” where over the summer clergy were attacked, injured and killed.

Bishop Hilary stated: “The church has been the only trusted and effective tool standing on behalf of the masses. It presented the suffering of the people like no other organisation would do. Its spiritual, moral and ethical role is to encourage the people with the word of God and to work to reduce the stressful experiences our people have been subjected to by masters of the war machinery.

“The church has been there among the people to diffuse tension in their minds. It has been the church that engaged very high level delegations of different groups from Government of South Sudan to high level representatives of UN agencies, telling the truth to them.

“It’s a very serious sacrifice made by the church leaders to remain in Yei at a time when security per se had broken down and our members were being killed at ease. The church leadership together with the priests has taken the risk beyond the call of duty.

“For them (bishops, moderators) and our committed and courageous priests, it has been a matter of accepting the eventual worse to come their way. The mediating role of the church and the work for advocacy for peace is being undermined by such acts of atrocities.”

Reflecting on Bishop Hilary’s decision to return to Yei, CMSI states: “For us it seemed like a difficult decision for Bishop Hilary, but in fact it was straightforward for him, and his mind and heart were set. Funds from the SS emergency appeal assisted him in making the journey back to Yei, and we await his return to Arua so that he can make contact again and update us on the situation. Mama Joyce remains in Arua, please pray for them both.” 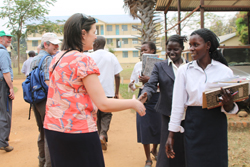 Judith Cairns and other members of the Connor team which visited Yei in 2013 greet students at the Yei Teacher Training College. The college has been forced to close due to the conflict.

CMSI said that the staff at Yei Teacher Training College had been hoping to reopen, but this is no longer being considered an option in the near future.

Bishop Hilary said: ““In  the  last  two  months,  we  have  been  looking  at  alternatives  of  continuing  our  teacher training programs in the country. I am therefore happy to inform you that we have started in-service training (that leads to accreditation after three years) in two satellite locations, one in Juba and another in Awiel (Northern part of the country). So far we have a class of 62 and 90 students respectively in the two locations.

“For now, management has stayed the recall of the continuing students as this requires more time and thinking through, given they are scattered within the country and beyond. This has been pushed to the beginning of next year.

“We continue to thank you for your faith in us and the support rendered during these past months.”

The Bishop Allison Theological College has been relocated to a rented property in Arua, and it is understood that the students planned to return on September 2.

Bishop Hilary said he was encouraged that the college has three new voluntary staff.

You can download CMSI’s latest update from South Sudan.

Following an appeal by Bishop Hilary earlier this year, people and parishes in Connor have donated more than £11,000 to CMSI’s Yei Fund.

CMSI has thanked its supporters for the time, prayer and support that they offer to brothers and sisters who are still in South Sudan and to those who have had to flee their homes and their country.