Menu
Home > News > Aurelia inspired to step out for Chest, Heart and Stroke

Aurelia inspired to step out for Chest, Heart and Stroke 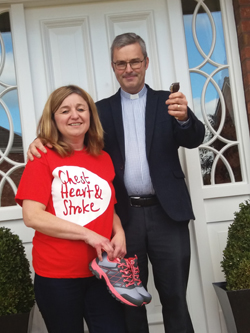 The Rev Trevor Kelly, curate of Drummaul, Duneane and Ballyscullion Parishes, manning a stopwatch as his wife Aurelia prepares to set off on Saturday September 23 on the Half Marathon Causeway Coast Walk on behalf of Northern Ireland Chest Heart and Stroke

Aurelia Kelly, wife of the Rev Trevor Kelly, will be taking part in the Causeway Coast Half Marathon Walk on Saturday September 23 to raise funds for Northern Ireland Chest Heart and Stroke. Trevor, who is curate in the Parishes of Drummaul, Duneane and Ballyscullion, suffered a number of strokes and TIAs three years ago.

He had four separate hospital admissions before being diagnosed with a condition called ‘Antiphospholipid Syndrome’ which causes an increased risk of blood clots.

“With God’s grace, the power of prayer and the wonderful drug warfarin he was able to resume his full-time job as a teacher and his role as a curate,” Aurelia said.

Her initial fundraising target was £500 but with five days still to go this has been surpassed and by Sunday her tally had reached £852.25.  Aurelia now hopes to reach £1,000 for Northern Ireland Chest, Heart and Stroke.

Anyone would like to sponsor Aurelia can visit her Just Giving site.