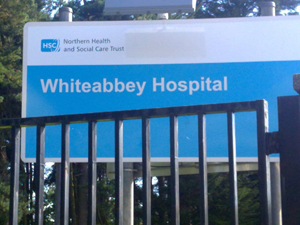 Rehabilitation wards at Whiteabbey Hospital may be closed to make financial savings.

Concerns have been raised about a proposal to close rehabilitation wards at Whiteabbey Hospital with the rector of Cloughfern Parish, the Rev David Lockhart, saying any closure would affect many vulnerable people.

The proposal is contained in a Northern Health Trust consultation document, drawn up at the direction of the Department of Health to outline ways the Trust could make financial savings.

A Trust spokesperson said no decisions had been taken and the consultation will continue until October 5.

As part of the consultation process, a public meeting will be held in the Linen Suite at Mossley Mill from 2pm-4pm on Thursday September 21. The Chief Executive of the Northern Trust will do a presentation and there will be the opportunity for the public to ask questions.

This is one of a number of public meetings about the proposed savings taking place across the Northern Trust area.

Rev David Lockhart said it was his understanding that Wards 2 and 3 in Whiteabbey Hospital were earmarked for closure.

“This will have a great effect on many vulnerable people.  From what I am led to believe the building work on a proposed site at Antrim Area Hospital for a replacement for these Whiteabbey services has not even started yet,” David said.

“Ward 2 and Ward 3 deal with patients who have just had strokes or broken hips etc.  The intensive physio, speech therapies and care for such people can make a real difference in their conditions and future prospects.

“Upon closure these vulnerable people will either end up in Nursing/Residential Homes or back home with very little or no physio/speech intervention which will lead to poorer long term outcomes for them.”

David added: “With the political deadlock and vacuum this matter has been exasperated as it appears mainly to be driven by just finance and not the well-being of people.”

The Trust spokesperson said the proposal was to temporarily close the rehabilitation wards at Whiteabbey.

This proposal is outlined in the Trust’s consultation document which can be downloaded at www.northerntrust.hscni.net. The section relating to Whiteabbey Hospital can be found on page 15. Details of other consultation meetings are also on the Trust website.