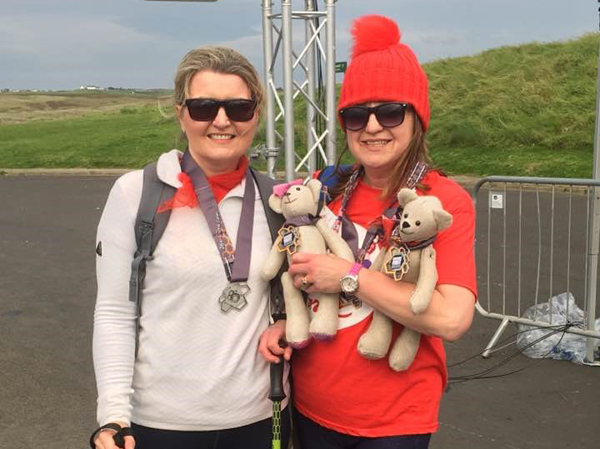 A massive well done to Aurelia Kelly, wife of the Rev Trevor Kelly, who completed the Causeway Coast Half Marathon Walk on September 23 raising £1412.25 for Northern Ireland Chest Heart and Stroke.

Three years ago Trevor, who is curate in the Parishes of Drummaul, Duneane and Ballyscullion, suffered a number of strokes and TIAs. He was diagnosed with a condition called ‘Antiphospholipid Syndrome’ which causes an increased risk of blood clots.

Supported by prayer and with the help of the drug warfarin, Trevor has been able to resume his full-time job as a teacher and his role as a curate. 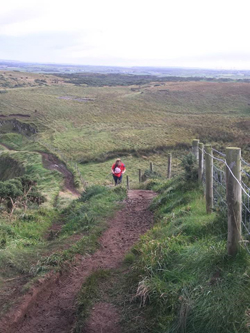 The half marathon was ‘no walk in the park’ said Aurelia.

Aurelia undertook the marathon walk with her sister, Professor Lorraine Martin. They started at Larrybane Head, near the Carrick-a-Rede Rope Bridge.

Aurelia said: “With a route of 14 miles covering a variety of terrains including road, cliff path, grass banks, beach and numerous stiles, one of the most difficult sections was crossing the Boulder Field at the end of Whitepark Bay Beach.

“It was a very challenging walk, hugging the coastline throughout, and was more of an army assault course than a walk in the park, however the picturesque scenery of the route was breathtaking.”

Aurelia wishes to thank everyone who supported her on the walk, especially her sister Lorraine, her prep walking buddy Rosemary Frayne who was walking a similar route the next day for the Cancer Fund for Chilldren, and sponsors on the day: – Toast, Cullybackey, Rococo Ballymena, The Velvet Rose, Ballymena and Darren Cumberland Photography.