Historic Magheragall quilt to be included in National Treasures archive 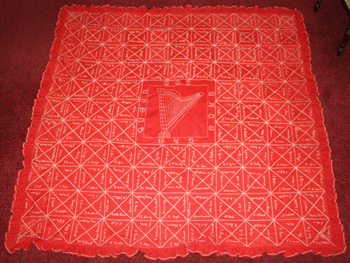 A handwoven quilt belonging to Magheragall Parish has captured the interest of a media production company, and will feature in a televised roadshow on October 22.The company issued a plea for objects that explore the role of the Anglican community over the past 100 years in the history of the island of Ireland.

This is part of a social history project in partnership with RTE and the National Museum of Ireland called National Treasures.

The Rev Nicholas Dark, rector of Magheragall, read about the search on the Connor diocesan website, and contacted producer Ciaran Deeney about a quilt which he felt would be of interest.

Nicholas explained: “In this parish there is evidence that people made quilts in which local names were woven and then they were auctioned to raise money.”

Among the examples which have survived is a quilt belonging to Magheragall Parish which is red in colour with centrepiece that reads God save the Queen, and as it was pre partition it has a Harp in the very centre. This quilt has now been included in the digital archive.

Nicholas said: “When you think that ‘For God & Ulster’ became the slogan, it is amazing to see in 1896 in this Parish ‘God save the Queen’ woven around an Irish harp which is at the heart of the quilt.”

He relates how the quilt came to be in Magheragall Church more than 120 years after it was auctioned off. “At the auction in 1896 it was won by a local landed family who held on to it for years before they decided to give to a women who worked as a servant in their house because she was Church of Ireland.

“That woman, as she approached her mid 90s, decided that if she died someone might just throw it out so she called the church and we gladly received it back after over a 100 years.”

Nicholas plans to bring the quilt along to the National Treasures roadshow taking place in the Andrew’s Gallery, Titanic Quarter, on October 22. The production company will be filming at the roadshow for a TV show and a team of curators will be assessing objects for inclusion in an exhibition next year. Other roadshows are taking place in Dublin, Galway and Cork.

The digital archive can be viewed at www.nationaltreasures.ie

This red quilt is one of two connected with Magheragall parish with names woven on.  A white quilt is held in Lisburn Musuem. It was made in 1899 and in the photograph below is being held by two daughters of a former rector in the early 1960s.

The ladies are Bobby (Roberta) and Miriam and their father was Canon Robert Doogan Wright (Bob) who died on March 14 2015. 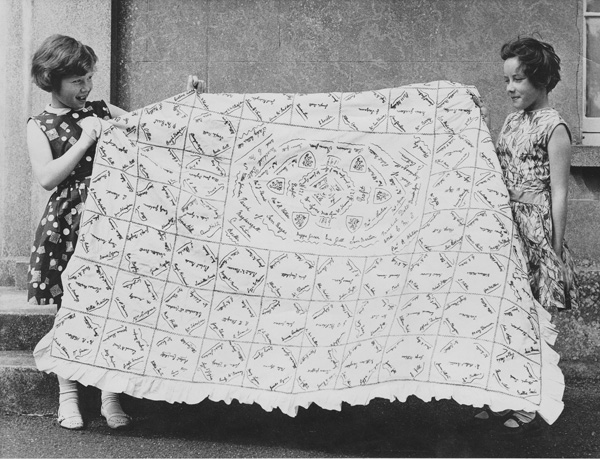 Bobby (Roberta) and Miriam Doogan Wright with the white quilt woven in 1899 and now held in Lisburn Museum.