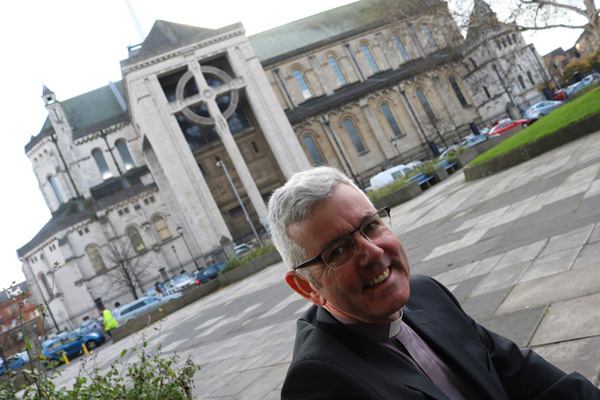 Archdeacon Stephen Forde, rector of Larne and Inver with Glynn and Raloo and Archdeacon of Dalriada, has been appointed Dean of Belfast

The Ven Stephen Forde, rector of Larne and Inver with Glynn and Raloo and Archdeacon of Dalriada, has been appointed Dean of Belfast.

The appointment was announced by the Board of Nomination of St Anne’s Cathedral on Sunday October 29. Archdeacon Forde succeeds the Very Rev John Mann who has moved to Salisbury Diocese.

Archdeacon Forde, 55, was born in Banbridge and grew up in Rathfriland, Crossgar and later Belfast. He was ordained a deacon in 1986 and a priest in 1987. He was educated at Campbell College, Belfast; the University of Edinburgh and the Church of Ireland Theological College.

He is married to Fiona, a Staff Nurse at Antrim Hospital, and the couple has two daughters Rachel and Amy, and a son, Michael.

Archdeacon Forde was curate assistant at St Mary’s Parish, Crumlin Road, Belfast, Diocese of Connor, from 1986-1989 and was Chaplain at Queen’s University, Belfast, from 1989 until 1995 when he moved to Dublin Diocese as incumbent of the Grouped Parishes of Booterstown and Mount Merrion.

In 1999 he returned to the Diocese of Connor as rector of the Parishes of Larne and Inver with Glynn and Raloo.

In Larne, Archdeacon Forde saw through the completion of three major building projects, with the total restoration and refurbishment of Glynn Parish Church (1999-2000), and Raloo Parish Church (2005), and a significant extension to Glynn Church in 2012.

The medieval church of St Cedma’s, Larne, which dates to 1350, was sensitively adapted to meet disabled access requirements, and the church roofs and tower were repaired earlier this year.  Since 2011 Archdeacon Forde has led a major project to build a new parish hall complex at St Cedma’s.

He has led Connor Candidate Priests’ Retreat and similar retreats in the dioceses of Connor and Down and Dromore and is a current member of Connor Synod Planning Group.

Outside of ministry, Archdeacon Forde was chair of Larne High School Board of Management from 2004 to 2007. He is a former Campbell College chorister and a former member of the University of Edinburgh’s St Cecelia Singers. The Dean-Elect’s interests include music, hill walking, cycling, photography, travel and reading.

Archdeacon Forde said his appointment was ‘a huge challenge’ and one he is ‘incredibly excited about taking on.’ “I am conscious that this is a time of significant change for the Cathedral,” he said. “For many years it was at the edge of city life and now it is at the very centre of the thriving Cathedral Quarter.

“My vision is to see the Cathedral as a spiritual centre at the heart of the city, a Cathedral with doors to pass through, not to pass by. It is a Cathedral open to all, for those who are seeking God and faith in the 21st century. Building on the legacy of those who have gone before, the Cathedral will continue to offer prayer, praise and service.”

The Dean-Elect said the Cathedral needed to be a place of ecumenical endeavour, reaching out to all, and to become a meeting point in a city that has become increasingly multi-ethnic and multi-faith.

“I would love to see the Cathedral as a place of social justice and social outreach, building on the tradition of Black Santa where the generosity of people is used to support charities in Northern Ireland and overseas. It is exciting to see how that can be taken forward in relation to the needs of the city,” Archdeacon Forde said.

He said he did not expect to be in post as Dean before Christmas but the Black Santa tradition will continue uninterrupted. “I will be a Black Santa in training, and hope to be present at the launch of the 41st Sit-out for charities in December along with colleagues from the Cathedral clergy and Chapter,” Archdeacon Forde said.

He is also committed to building on the ‘musical excellence’ that has been established in St Anne’s in recent years, and to the Cathedral’s work in schools in north Belfast. “I want to continue to give opportunities to people across the city to develop self-confidence and self-esteem,” he said.

“I would also like to explore how the Cathedral can give a lead in being a place where we take our ecological commitments seriously.”

The Bishop of Connor, the Rt Rev Alan Abernethy, Chairman of the Board of Belfast Cathedral, said: “I am delighted to welcome the appointment of Archdeacon Stephen Forde as the next Dean of Belfast. He has been a very able archdeacon, a faithful, hard-working rector, a trusted colleague and an encouraging friend. He brings a breadth of experience, a humble spirit and a joyful faith to his new role.

“I know the Cathedral will welcome him and be blessed by his ministry and leadership.”

No date has been set for the installation of the new Dean of Belfast.