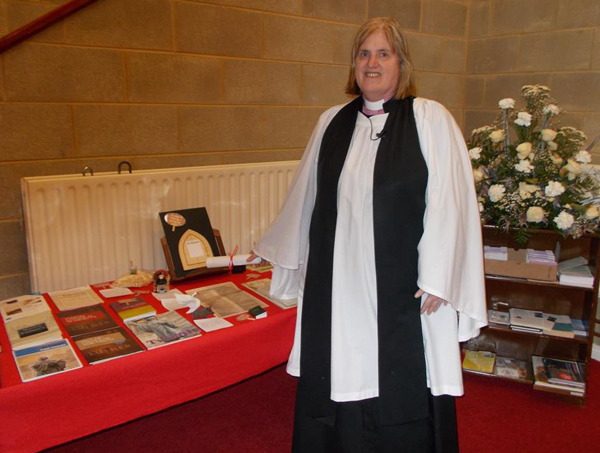 The Rev Arlene Moore with some of the exhibits on display in the exhibition in St Comgall’s commemorating the 500th anniversary of the Reformation.

St Comgall’s Parish, Rathcoole, held both a special service and exhibition to commemorate the 500th anniversary of the beginning of the Protestant Reformation.

Priest-in-charge, the Rev Arlene Moore said it was decided to commemorate rather than celebrate this anniversary ‘to reflect sorrow for the pain and division in the Body of Christ that has resulted.’ 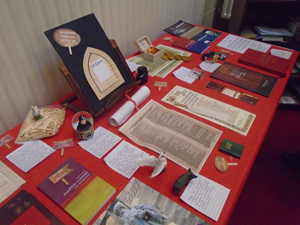 She said: “However, we did want to remember and thank God for our heritage and all the good that has issued from the Reformation. We wanted to do something in our day to mark this important historic milestone especially in a predominantly Protestant estate, such as Rathcoole.”

She said that as well as holding a special service, the parish wanted to do something more creative as well. “Conscious of the fact that many Protestants really do NOT know their own history we felt that it would be good to try and address that in an accessible way,” she said.

“We wanted to do something that would help the congregation share their faith and reach out to others with the love of God and as a way of bringing the Reformation alive.”

Mr Tom Nelson put together a commemorative booklet, with images and snippets from history about various key people and events. A special order of service was compiled and the liturgy crafted thematically around the Five Solas. 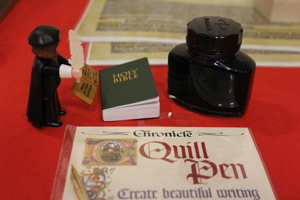 Elements from various denominational traditions were used: The Lutheran prayer book, the Heidelberg catechism, material from Presbyterian CI, and MCI, as well as the Lund statement. Thanks to Rev Nigel Dunne, permission was given to use some of the liturgical material, lyrics and ecumenical readings from the 500th Reformation anniversary service in St Fin Barre’s Cathedral, Cork, scheduled to be broadcast by RTE that same day.

Arlene said that in true Luther style a surprise awaited the congregation when they arrived on Sunday of the anniversary. “A colourful exhibition had been set up in the foyer and decorated the stairs leading to the church sanctuary itself. It was partly based on the Luther1517 project booklet ‘Luther’s life in Ten Objects’, put together as a joint initiative between the Linenhall Library, Belfast and the Orange Order,” she said. 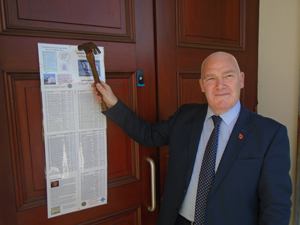 A scroll containing 95 ideas for random acts of kindness/service accompanied by 95 equivalent supporting Scriptures was pinned to the outside of the front door.

The display also included books on Luther, his wife Katarina de Bora and other key players such as Calvin, Zwingli, Jan Hus and Erasmus, as well as on the outworking of the Reformation in various countries. There were also DVDs, a copy of Tyndale’s 1526 New Testament; a special anniversary edition of Luther’s 1534 Bible in German, the now famous Playmobil Luther, ink printing stamps, quill pens and calligraphy parchments; and other commemorative objects, toy figures and special memorabilia from Germany.

The children at the service were introduced to the symbolism of Luther’s rose and issued with the challenge of learning by heart the Scriptures contained in Luther’s pouches, which each child received to take home as a memento.

Ninety five key facts about Luther’s life were woven into the sermon along with two challenges reflecting the Gospel lectionary reading (Matt 22:35-) Using a ‘Where’s Wally?’ image people were invited to connect with the question ‘Where’s God?’, Luther’s personal quest and their own life experience.

Then people were encouraged to consider how they might need to change to meet the challenges of presenting the Gospel today.  The 95 Acts of service challenge was offered as one way of beginning this journey of re-formation and calling Protestant Christians again to the Biblical way of Jesus.

A scroll containing 95 ideas for random acts of kindness/service accompanied by 95 equivalent supporting Scriptures was unfurled and then taken by one of the Church wardens to be pinned to the outside of the front door as a statement of protest at human self-centredness, and as a symbol of desire to change/repent. 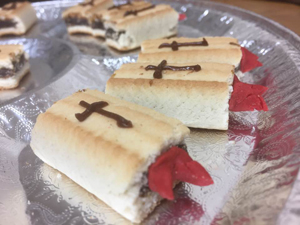 The congregation inside stood to join in an act of commitment.

Arlene added: “So the Reformation was not only revisited but begins again in Rathcoole!”

After the service various there was an array of special Reformation themed treats prepared secretly by Rev Arlene and her family – a ‘diet’ of gummy and Squirly worms; Luther’s rose buns, edible Twiglet, Matchmaker and marshmallow hammers with fruit winder scrolls; iced fig roll and chocolate biccie Bibles, chocolate gold coins, and even delicious Luther shaped shortbread, made by Carol Moorehead (a chef and cousin of Rev Arlene Moore)

(Should you wish to participate, copies of the 95 Acts of Service are available on request from any member of St Comgall’s or Rev Arlene Moore  sendmyemails2me@yahoo.com)