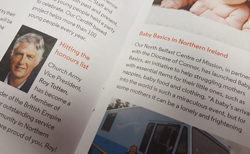 Baby Basics, an initiative by the North Belfast Centre of Mission, has been highlighted in the Church Army’s new supporter magazine Catalyst.

Connor Church Army Evangelist Karen Webb is working on this with Diocesan Children’s Officer Jill Hamilton. Karen told Catalyst: “A baby’s arrival into the world is such a miraculous event, but for some mothers it can be a lonely and frightening experience.”

Roy Totten, an Honorary Vice-President of Church Army and a member of Glenavy Parish, also features in Catalyst. Roy was awarded an MBE in the Queen’s Birthday Honours for services to the community in Northern Ireland.