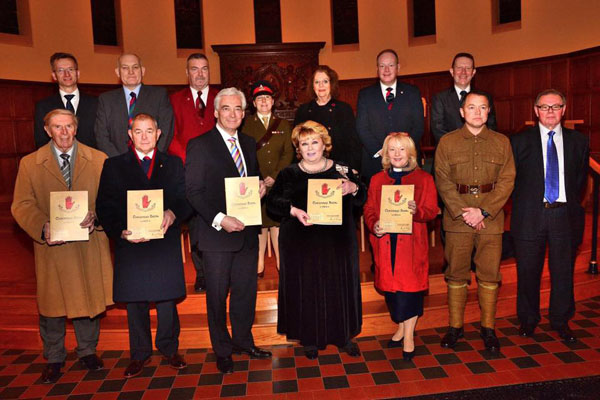 The rector of St Matthew’s, Belfast, the Rev Tracey McRoberts, front row, third from right, with Her Majesty’s Lord Lieutenant for the County Borough of Belfast, Fionnuala Jay-O’Boyle CBE, front centre, and Mr Paul Clarke, UTV, third from left, and other guests at the launch of the updated Ulster Volunteer Force Hospital Christmas Book.

The event was hosted by the City of Belfast ABF (formerly Army Benevolent Fund), in conjunction with the 1st Shankill Somme Association on Friday November 24.

The book – the original of which dates to 1915 – was launched by Her Majesty’s Lord Lieutenant for the County Borough of Belfast, Fionnuala Jay-O’Boyle CBE.

UTV’s Paul Clarke MBE was the host, and during the evening a medley of First World War tunes was played by The Regimental Band UVF East Belfast 1912. 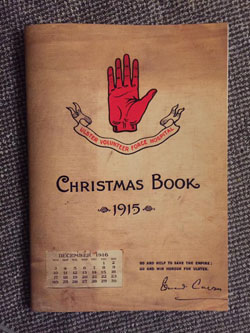 The Ulster Volunteer Force Hospital Christmas Book was first published in 1915 to raise money for wounded soldiers in UVF hospitals. Following the outbreak of World War One in 1914 the UVF – founded in 1912 to block Home Rule – offered a fully equipped hospital for the treatment of sick and wounded soldiers.

Many of the UVF men went to fight, mostly with the 36th Ulster Division. The original charity hospital at Circular Road in east Belfast operated for many years along with smaller branch hospitals before becoming the Somme Nursing Home on the same site in the early nineties.

The UVF Hospital Christmas Book was primarily aimed at raising money for the wounded soldiers coming home from the Great War to the UVF hospitals. It carried letters and messages from the King at the time and also Sir Edward Carson, who formally opened the hospital in 1915. The revised edition of the book includes everything from the previous book plus some updated stories and artefacts of interest.