‘Uneasy calm’ in Yei but no real peace in South Sudan 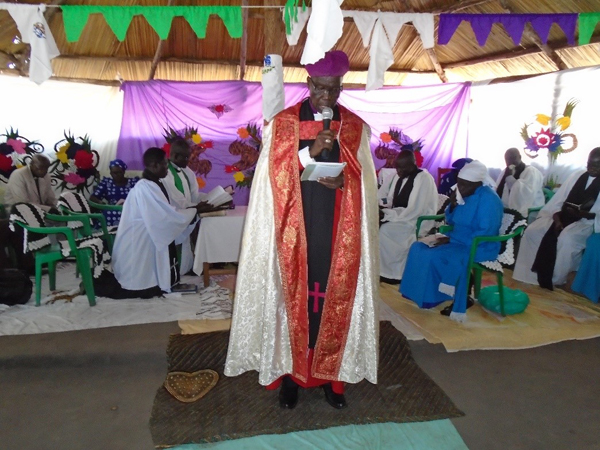 Bishop HIlary of Yei, preaching at a recent service, says there is no real peace for the people of Yei or South Sudan as Christmas approaches.

As our friends in the Diocese of Yei approach another Christmas in the midst of civil war, Bishop Hilary of Yei reports that there has been an ‘uneasy calm’ in the area for the past six months.

But there is no real peace, Bishop Hilary said. People are still being attacked in their homes by gunmen, all available land in the town is being used to grow food so another acute shortage like that experienced last year is averted, and the local theological college has been abandoned and reopened in Arua, Uganda.

Funds from CMSI, much of which was donated to the Connor Yei Appeal, literally rescued clergy trapped in Yei, the bishop said. This financial assistance allowed the clergy to buy food, pay their children’s school fees and get much needed medicines.

“Some of the clergy and their families came to my office to praise the Lord and thanked the Christians of the Church of Ireland for their very timely gift that was not expected,” Bishop Hilary said.

The situation has also improved for those who fled Yei and other parts of South Sudan and are now living in the huge refugee camp known as the Rhino Settlement in Uganda. 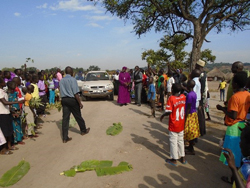 A warm welcome at the Rhino refugee camp for Bishop Hilary and his pastors.

Bishop Hilary and his pastors led services there when they visited on November 19 and 26 and will return to take services in Rhino Camp this Advent Sunday, December 3.

In an update from his exile in Uganda, Bishop Hilary said the war in South Sudan continues unabated. “There are skirmishes almost in all corners of the country. Civilians are being subjected to harassment and ambushes on the roads and in their localities. Night attacks on individuals in their houses like in Yei, are causing immense fear to the citizens,” he said.

“While the security all over South Sudan is greatly compromised, certain factors such as extremely bad road networks and constant waylaying civilian vehicles reduce personal freedom of movement to zero on many state and national roads.”

The Bishop said it appears more factions are forming up and announcing their presence in the crisis, exacerbating the situation and causing many deaths. Some of these factions clash between themselves for control of territory and the political space in the locality, and these clashes create more fear throughout Yei and in the rural areas in Yei River State.

“From about June 2017 until now, Yei experienced what might be described as quiet and uneasy calm,” Bishop Hilary said.  “The security situation within town somehow improved such that people can sleep at night without being woken up to the outburst of automatic gun firing which has remained the characteristic of life in most SS towns including Juba. 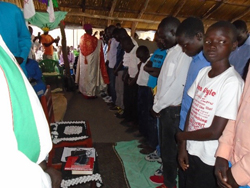 Boys are confirmed at a service in the camp. They are the future of the church, Bishop HIlary said.

“The presence of the church leaders and constant coordination of affairs concerning security with the Governor of the state helped pressure them to at least keeping peace in the town since in reality there is no enemy within the limits of the urban area of Yei.”

But he said there is no real peace, with people being attacked at night in their homes by unknown gunmen. “In August this year, three of my priests were attacked at night and robbed of all the meagre possessions including the last money for their feeding. This left one of the clergy badly injured. In Yei town, one cannot walk beyond 7pm.”

He said the rural areas were a ‘hotspot’ for killings, rape and looting. Many civilians have had to flee into deep forests to hide in fear for their lives.

Staff from the Bishop Alison Theological College have fled to the refugee camps, and so the college has been abandoned in Yei.

“We reopened the college in Arua and it has been a blessed inspiration that we did so,” Bishop Hilary said. “All our students, except four out of 20, managed to walk to Uganda. We are pleased that our candidates will soon be sitting for their diploma and certificate examinations from Uganda Christian University.” 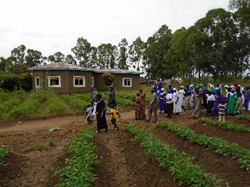 Crops are being grown on all available land in Yei town to help alleviate food shortages.

The Bishop said there were 200,000 people stranded in Yei, and there was not sufficient food for them all. “Since the outbreak of the crisis in Yei July 2016, WFP distributed food only twice. In the beginning of the rainy season, we urged our people in Yei to grow food in any available empty space in town. As I write, there are vegetables in town, maize, ground nuts, cassava, chickens and grains. This has reduced the acute shortage of food that we experienced in the second half of 2016 and the first three months of this year,” he said.

Speaking of the financial support from CMSI, Bishop Hilary said the clergy had been ‘rescued’ by CMSI who sent relief cash for the clergy and those who support them in their respective ministries.

“That financial assistance enabled the clergy to buy food, pay school fees of their children, got their medicines from the local pharmacies and one lady was able to pay the fees of her son in Juba University.

“Some of the clergy and their families came to my office to praise the Lord and thanked the Christians of the Church of Ireland for their very timely gift that was not expected. They also thanked me for the connections and care for them.” 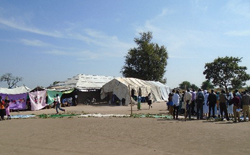 One of the camps which makes up part of the huge Rhino refugee settlement in Arua, northern Uganda, where many thousands of South Sudanese are now living.

Bishop Hilary said the Diocese had planned a series of visits to different refugee camps belonging to the main Rhino Refugee Settlement. The first visit was to Wanyage refugee village, home to more than 60,000 people.

“In our discussion with the Presiding Priest and the camp officials, I was happy to hear from them that the conditions of the refugees in the many zones within the greater Rhino Refugee Settlement have greatly improved,” Bishop Hilary said.

“The camp leaders stated that, at first when they arrived the settlement, conditions were dire as they were thrown in the bush with no shelters on their heads.  Food was a problem and schools were not readily available for the children.

“But as they settled in, UNHCR and all the organisations working for the refugees tried their best to improve the food rations and water delivery to the refugees. They said children now have education and although medical services are still not adequate, they do receive good service, depending on the sickness.” 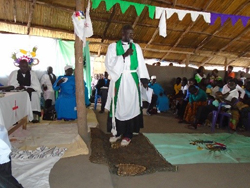 Bishop Hilary said he and his team had visited and led services in the camps on November 19 and 26. “Generally the refugees look good and healthy. They gave us a tumultuous welcome with dancing and songs. We led the services and in both camps the mood of the refugees was good,” the Bishop said.

You can continue to offer prayerful and financial support to our partners in South Sudan via CMS Ireland’s South Sudan Appeal.